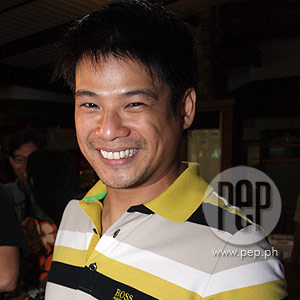 
Yul Servo is once again honored in Belgium for his acting skills. The councilor of Manila just came back from Brussels where he accepted his Best Actor award for the film Torotot (international title: Destierro).

He is doubly happy since his other film, Brutus, was named Best Asian Film during the 35th Brussels International Independent Film Festival.

PEP (Philippine Entertainment Portal) was able to personally congratulate Yul when he arrived at the Cinema One press conference last Wednesday, November 12, at the Gusi Restaurant in Quezon City. What was his reaction when he was called onstage as the Best Actor?

He revealed that his Best Actor award comes with a cash prize of 200 Euros but the trophy will be shipped to him by December. Through the help of the Film Development Council of the Philippines, Yul and Direk Maryo J. delos Reyes were able to attend the film fest, which took place from November 4 to 9.

In Torotot, Yul plays a man who suspects that his wife (Precious Adona) is having an affair with another man. His best friend (played by Baron Geisler) had previously committed a crime of passion when he murdered his wife (played by Maui Taylor).

Produced by Viva Digital, Torotot is directed by Maryo J. delos Reyes, who is also Yul's manager. The director of Brutus, Tara Illenberger, also attended the filmfest to accept the award of Best Asian Film. Shot in Oriental Mindoro, this Cinemalaya 2008 entry is about Mangyan children who transport illegal logs by floating them down the Lisap River. Yul is cast as the doctor turned NPA leader who accompanies the two children.

More than 25 countries participated in the 35th Brussels IFF. This competition, which started in 1974, already recognized Yul in the past.

In the 2002 Brussels IFF, Yul shared the Best Actor award with Joel Torre for the five-hour film Batang West Side. This Lav Diaz film also bagged the Best Picture trophy that year.


This November, Yul will be seen in the Cinema One entry Dose (Twelve), which is about the close bond between a young boy and a gardener. The fourth Cinema One Originals Digital Film Festival will have its campus tour from November 19 to 27. The seven competing films will have theatrical screenings at IndieSine, Robinsons Galleria from December 3 to 10.