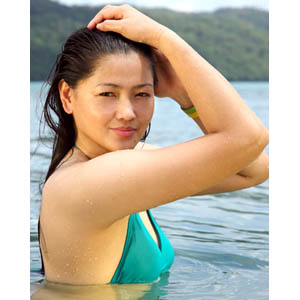 Taekwondo expert Veronica "Vern" Domingo, considered to be one of the biggest threats in the competition, was voted out in tonight's episode of Survivor Philippines. She became the 10th person to be voted out and the third member of the Jury.

The eight members of the Chalam tribe, the merged tribe of Naak and Jarakay, came to their third Tribal Council to vote out one of their members.

The five remaining members of the Naak tribe—JC Tiuseco, Rob Sy, Cris Cartagenas, Kaye Alipio, and Zita Ortiga—bonded once again and voted against Vern. On the other hand, the three members of the former Jarakay tribe—Vern, Marlon Carmen, and Charisse Yacapin—voted for Rob.

Vern now joins Jace Flores and Kiko Rustia in the Jury, which will decide who will win the three-million cash prize and the title of the first-ever Pinoy Sole Survivor.

THE TRIBAL COUNCIL. Since Charisse won the third Immunity Challenge, she was safe from tonight's Tribal Council. But Vern decided to give the black pearl to Charisse, who genuinely looked surprise at Vern's move.

Before casting thier votes, Rob vented his anger about Kiko Rustia's decision to give him the black pearl in last Monday's (November 10) Tribal Council, where Kiko was voted off. "Napeste ako, nabuwisit ako sa kanya!" admitted Rob. He then added, "Natraydor ako!"

While Rob was talking, some of his tribemates couldn't help but laugh while listening to him.

REWARD CHALLENGE. Meanwhile, JC won the Reward Challenge for the second time in a row. As the winner, JC was asked again to bring along three members of his tribemates to an overnight stay on an island resort. JC picked Rob, Cris, and Kaye; leaving Nanany Zita behind.

Back in the camp, Marlon worked on Nanay Zita and tried to use her "tampo" against JC, suggesting that she vote him off in the next Tribal Council. But Nanay Zita's heart softened when JC apologized and explained to her why he chose Rob, Cris, and Kaye that time.