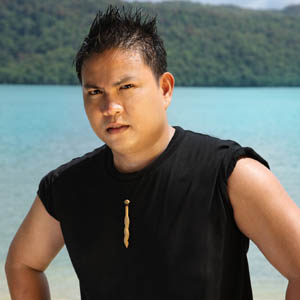 Waiter Marlon Carmen becomes the 12th person to be voted off Survivor Philippines.

With only seven castaways left, all the tribemates of Marlon in Chalam voted against him, while he voted against company driver Cris Cartagenas. With his ouster, Marlon became the 12th person to be voted out from Survivor Philippines and he also became the fourth member of the Jury; along with Jace Flores, Kiko Rustia, and Vern Domingo.

Before the Tribal Council, Marlon already sensed that he would be voted off next. As a last-ditch effort to save himself from the game, he threatened to hide the flint and kill the fire if his tribemates vote him out.

In the end, Marlon had a change of heart and did not continue his devious plan.

But just like most villains in movies and teledramas, Marlon would not go down without giving a last fight. He said that he has another plan that he refused to tell to anyone.

"It's for you guys to know and for me to find out," Marlon said about his "secret weapon."

But his tribemates had enough of Marlon so they voted him off, including his former Jarakay tribemate Charisse Yacapin. Charisse, who was holding the "black pearl," automatically had one vote even before the voting started. But she was able to survive elimination, thanks to Marlon's ouster.

Marlon decided to give the "white pearl" to Charisse, who is now the only remaining member of the old Jarakay tribe.

In the last Immunity challenge, varsity player JC Tiuseco won so he was safe from the Tribal Council. Aside from winning the Immunity, JC was able to see the full video message of his girlfriend and got a five-minute call to her.

JC picked Cris and Marlon when Paolo asked him to choose two of his tribemates, who will also get to see the full video message of their loved ones. Marlon cried like a baby upon seeing the video message of his girlfriend.

Cris, on the other hand, won last week's Reward Challenge (spear throwing). As the winner of the challenge, Cris got to decide which of his tribemates will eat a specific menu. Naturally, Cris chose the most delicious—steak and rice with a bottle of softdrinks—while he gave Marlon a tamarind with a glass of softdrink, and Charisse a plate of salt with softdrink.

Other highlights from last week's episode:

Cris and Kaye plotted against Rob Sy and Zita Ortiga. Cris suggested to Kaye that she make up a story about him courting her in an effort to confuse the other castaways.

Marlon and Cris had an argument over the "Jarakay soup." Marlon wanted to add another cup of salt water to the halaan soup, but Cris stopped him. A verbal tussle ensued.

At the Tribal Council, last week's castoff Vern Domingo, who looked gorgeous in her outfit, made a mind-boggling entrance when she posed in front of the remaining castaways. Rob literally dropped from his chair upon seeing Vern while the other castaways looked confused. Back at the camp, the castaways made fun of Vern.

In tonight's episode, Rob won the Reward Challenge. His prize is 50,000 pesos cash that will be sent to his family. Nanay Zita came close to winning, but she was not able to count correctly the five necklaces that were needed to complete the challenge.

As the latest castaway, Marlon is scheduled to make his round of interviews on different GMA-7 shows this week. Knowing that he is "the most hated" castaway of Survivor Philippines, it is interesting to find out how people will react to him and how well he will handle the anticipated animosity towards him.