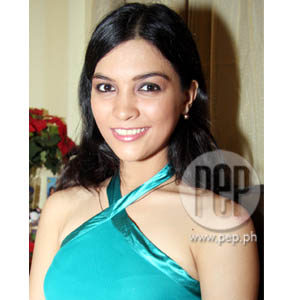 Former Bb. Pilipinas-World 2008 Janina San Miguel candidly confesses that she's not prepared to represent the country. That's why she gave up the opportunity to compete in the Miss World 2008 beauty pageant on December 14 in Johannesburg, South Africa. Janina majors in Broadcast Communication at the University of the East.

Former Bb. Pilipinas-World 2008 Janina San Miguel admits that several factors led her to pass up the honor of representing the Philippines in the upcoming Miss World 2008 beauty pageant in Johannesburg, South Africa on December 14.

In an article here in PEP (Philippine Entertainment Portal) last September 30, the Binibining Pilipinas Charities Inc. (BPCI) cited the death of her grandfather as the reason behind the decision. (CLICK here to read related story.)

"The untimely demise of her grandfather, among other personal reasons, has caused her undue stress, thus hindering her from fulfilling her duties to the said title... BPCI wishes to express its gratitude to Ms. San Miguel for this act of graciousness and concern for the country. They also wish her well in her future endeavors," read the statement furnished by the Araneta-led organization to the media.

When the news came out that Janina would no longer compete internationally, rumors started circulating that she was just forced by the BPCI to relinquish the crown due to her "lack of professionalism" during training sessions.

Janina confessed that she threw a fit while in the middle of a rehearsal when she learned that her grandfather was dying.

Janina emphasized that that was the only time she made a scene, contrary to the rumor that she was constantly testing the patience of her mentors and superiors.

PEP inquired if she was able to attend all the trainings set by the BPCI. "Hindi po," replied Janina, who frankly admitted that she was not able to complete the sessions for language training. Janina reasoned out that a conflict in schedules was the main reason she failed to report consistently. The BPCI people were fully aware of this since they were the ones making her itinerary.

FEELING THE PRESSURE. Janina gained public attention after she fumbled and stammered during the question-and-answer segment of the Bb. Pilipinas competition earlier this year. The incident made the 5'11" beauty queen an instant subject of ridicule. Critics accused her of "murdering the English language" and questioned the judges for letting her win in spite her glaring blunder.

Her grandfather's death turned out to be the determining factor in her decision to relinquish the crown. But public derision took its toll on her.

Janina said she has no regrets in giving up her crown, arguing that she's happy with her achievements here and doesn't see the need to compete internationally.