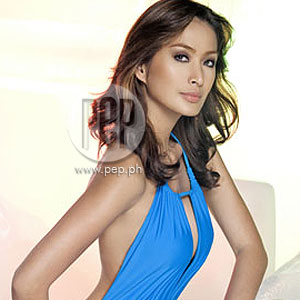 The Star Patroller of TV Patrol failed to win the "Atravesando de Vidrios" or "bicycle stunt, where she and two other "pump squad" members Jommy Teotico and Jose Sarasola had to smash into five sheets of glass while riding a bicycle. She was not able to pass even one glass while Jommy and Jose managed to break one and five glasses, respectively.

She lost the chance to win the first "El Ultimo Participante" title, house and lot, and the P2 million cash prize.

Despite this, the showbiz talk show host is happy that she was able to prove she's not only a celebrity, but also has the guts to do some stunts similar to that of Pinoy Fear Factor. "Sobrang disappointed ako pero binigay ko naman 'yong lahat ko and it was all worth it," she said.

Meanwhile, the competition is getting tougher as the remaining "participantes" get to the "cuarta ronda de eliminacion."

Jommy and Jose, together with the other pump squad members RJ Calipus and the new recruit Doc Elmer, plan to distract Manuel Chua, whom they consider the strongest challenger in every stunt. The lady "participantes" Janna Dominguez, LJ Moreno, and Savanah Lamsen vowed to defeat the men of Pinoy Fear Factor.

Catch more challenging stunts that were prepared to test the strength, courage, and even the intelligence of each "participante" from Monday to Friday on ABS-CBN before Eva Fonda. Also, watch the highlights of "Pinoy Fear Factor: Special Edition" on Studio 23 every Saturday at 7 p.m.
Read Next
Read More Stories About
Phoemela Barranda, LJ Moreno, Janna Dominguez, PEP
Post a Comment
Featured
Latest Stories
Trending in Summit Media Network