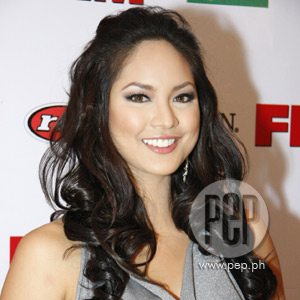 Rizza Santos's claim that Viva didn't inform her about the mall tours is refuted by Viva in a formal statement.

Former beauty queen and Pinoy Big Brother housemate Rizza Santos is filing a lawsuit against a clothing company she currently endorses. The company is asking her to pay a six-digit amount for her no-show at mall tours, which were supposedly part of her contract. (Click here to view previous article.)

"The fact that they're demanding 900,000...reduced to 350,000—for me to fund the fashion show is not right," Rizza told TV Patrol World in a taped interview shown earlier tonight, December 11.

Rizza also added that she had to go home to Canada to fulfill her military duties. She claimed that she wasn't advised by the Viva Artists Agency—the talent management group handling her—about the mall tour dates.

"I never said 'no' to any mall tours," Rizza said. "Actually we even came in to see my management to say, ‘Where are the mall tours?' I didn't receive any dates."

The clothing brand wanted to make it clear that adding Cristine Reyes to their roster of models was not a move to replace Rizza. However, they didn't want to comment on the case until Rizza sends in her demand letter.

VIVA STATEMENT. Today, December 11, Viva sent a statement to PEP (Philippine Entertainment Portal) concerning Rizza Santos's earlier remarks on Teleradyo and TV Patrol that the agency did not inform her of the said mall shows.

Viva aims to set the record straight with a chronology of events, as follows:

1) September 3, 2008—Ms. Santos met with the GM of Viva Artists Agency, Inc. (VAA), Ms. Veronique Corpus to inform the latter that she had to leave for Canada because she was "recalled for military service as a Canadian citizen" and that she had to attend to it personally. Consequently, Ms. Santos added that she might not be able to fulfill her commitments and left it open ended at that, without any definite date as to her eventual return to the Philippines.

RIZZA NEVER LEFT THE COUNTRY. In a previous report by PEP, Rizza had an issue with Viva concerning her last-minute plans to leave the country for her military service in Canada. Rumors back then said that Rizza never even left the country and supposedly underwent plastic surgery.

Rizza admitted that she didn't leave the country but said, "I don't see what does that have to do with the lawsuit [with the clothing company]."

"It's a personal issue," added her mom. "Whatever she does with her is nobody's business. It's her body—which is not true [sic]."

2) September 18, 2008—A meeting was held at the Viva office. In attendance were representatives from Tepoj Co. (owner of Mint Boutique), Ms. Riza Santos and representatives of VAA. The meeting was called by Viva upon the request of Mint Clothing to schedule the mall tours of Ms. Santos under her endorsement contract with Mint. The meeting ended with Ms. Santos not being able to give any commitments as she informed everyone present during the meeting that she might be called for military services by the Canadian Government. She then added that she will be leaving the country within the last week of September.

3) Week of September 20 to 27, 2008—Taping schedules of "Love Books" which Ms. Santos attended. It was during this period that she requested her VAA handler to ask the production of the show to finish her part of the taping early on September 27, 2008 to enable her to catch her early flight to Canada the following day, September 28.

4) From September 28, 2008-October 15, 2008—Ms. Santos was being updated about her projects and corresponding talent fees therefore and she acknowledged, but without clarifying that she was just here in the Philippines. On October 12, 2008, it was Ms. Santos's father, Ruel Santos who answered VAA's communication. Mr. Santos likewise did not inform Ms. Santos was just here in the Philippines the whole time.

5) October 16, 2008—VAA sent a letter to Ms. Santos. It was only then that VAA discovered that she never left the country, neither did she go to Canada on the day she informed VAA that she was leaving.