Karylle just smiled when asked if Marian Rivera is pregnant 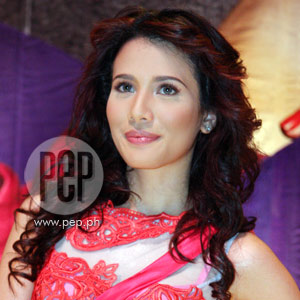 "I've never really had the chance to know her, but I've seen her dance and I am all praises for her. But there wasn't a chance to talk or anything except for that one time. I wasn't confronting her and there were people there and they know that we were just having a normal conversation," says Karylle when asked about Marian Rivera.

Karylle guested for the first time on The Buzz yesterday, December 15, to talk about being a Kapamilya. But since The Buzz's "Tough Ten" always focuses on controversial issues, it was inevitable that Karylle would face host Boy Abunda's tough questions regarding her ex-boyfriend Dingdong Dantes and his love-team partner Marian Rivera.

"So, alam mo yun, just having her by my side, and knowing that she's such a great person and everyone loves her... Parang it also follows that yung kindness niya bumabalik sa akin."

Karylle took a deep breath and said, "I was explaining recently, kasi I'm under new management [Stages]. And at the time, when everything was happening, you know, how when your emotions are too extreme, you're not supposed to make decisions. It's either you're too happy or too sad. Don't make major decision in your life. So yung career ko, ipinaubaya ko na sa kanila. I trust them naman with this business side, so I left it all up to them."

"Alam mo in my mind, that was what he said... I believe so," said Karylle.

Tough Question No. 7: "At what point in their relationship did Karylle give up?"

Karylle answered, "There was a point na nagigising ako in the middle of the night tapos [takes a deep breath]... Sabi ko na, 'Ano ba 'yon..."

Noticing her voice trailing off, Boy Abunda asked whether there was something wrong. Karylle answered, "I knew something was wrong and I asked to help me out and figure it out but, yun."

Did he help figure it out?

So, what did he say?

"I can't remember, e. Ang sa akin kasi, when it's work, it's work. But maybe you can make a simple request naman. After all, as if they're acting on stage. It wasn't a soap, it was a concert. So, that's different."

How about a gut feeling?

"I don't know. It's up for the people to decide. Hindi ko na iniiisip mga ganoong bagay."