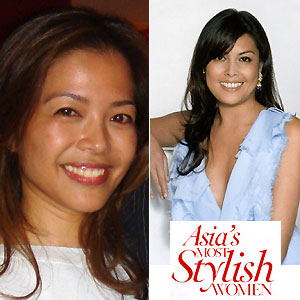 A few days before Christmas, Neny Montinola (left) and Patricia Panlilio-Cu-Unjieng (right) choose to put the "pepper-spray" issue behind them.

The "pepper-spray scandal" involving two socialites at the Embassy Fly at The Fort in Taguig City is officially over. It has taken the two women a whole month to come to a resolution, they've done so without once coming face-to-face with each other, and they leave in their wake a strange drama that remains unexplained.

On December 18, socialites Neny Montinola and Patricia Panlilio-Cu-Unjieng arrived at this mutually acceptable ending: Patricia would apologize publicly; Neny would no longer sue. The scandal, which began in the late hours of November 18 and culminated in the early morning hours of November 19, was finally over.

Originally, Neny was all set to sue Patricia, the woman she accuses of deliberately hurting her with a pepper spray at a birthday party that both had attended at the Embassy on November 18. Neny has now dropped this legal option, following Patricia's offer to write a "letter of apology." This came at the end of two weeks of negotiations where only their lawyers ever sat down to meet.

Patricia has "owned up to her mistake," according to a source who knows both women personally. The source adds that Patricia's lawyer has already forwarded the letter of apology to Neny's lawyer. The terms of the agreement, however, allow the publication of the letter of apology only in one daily broadsheet, which is Patricia's venue of choice. Neny waives all rights to a choice, although Patricia is expected not to delay the letter's release.

That something as threateningly debilitating—or even as lethal—as pepper-spraying should happen between two socialities begs an explanation. But for some reason, neither the "victim" nor the "culprit" has offered any.

The two women are not friends. They know each other, they have many common friends, and they both went to the Assumption College for high school, but they remain simply acquaintances. If they should have a common denominator, that would be Ricardo Po, Jr., a young and wealthy businessman who has been, in his words, "a friend of Neny for fifteen years" and the boyfriend of Patricia "for five years."

Neny is one of nine children of Serge and Ching Montinola of Bacolod. Ching de las Alas-Montinola is a prominent society figure, having served as presidential assistant to both Presidents Corazon Aquino and Fidel Ramos; while Serge Sr. is famously known today as the uncle of Gigi Montinola, currently the president of the Bank of Philippine Islands. Despite the pedigree, Neny is far from being a lady of leisure.

She is a single parent to two kids, after her separation from her husband Mandy "Boy" Eduque, the son of the late Elvira Manahan by a first marriage. She holds a regular job as a stockbroker in Makati, in an office that frowns upon strong media attention on its staff's private life. This is, PEP gathers, the source of Neny's extreme reluctance to speak to the media even about an incident where she is clearly the victim.

Patricia—better known as Trish in her circles—is a sometime model whose high-profile exposure came in 1987, when she emerged as a finalist in the Super Model of the World Philippines Search. (She eventually lost to Tweety de Leon, who went on to become an actress and a celebrity endorser.) Trish is married to, but separated from, Philip Cu-Unjieng, who currently works for the Lopezes of ABS-CBN. They have three boys.

Trish is the daughter of well-known jeweler Fe Panlilio and lawyer Peping Panlilio of Pampanga, now both deceased. A tall and stunningly attractive woman, she still turns heads wherever she appears. She is not known to hold a job. She has also found a protective knight in Ricardo, who openly defended her after the pepper-spray scandal. Although recently there has been talk that she and Ricardo are no longer an item, this is yet to be verified. Ricardo is presently in the United States.

NENY'S STATEMENT. After numerous attempts to get a statement from Neny, PEP finally received a text message from her on December 21, at 6 p.m. Neny sent what she calls her "first and last" comment about the issue and Trish:

"I'm just relieved that all this is now over, and we can get on with our lives. More importantly, I wish her all the luck in the future."

PEP went on to ask Neny what she believed to be Patricia's motive. Her reply: "I have no idea nor am I interested to know what she's thinking or why this happened. But what's important is that she realized she did something wrong. For whatever reason she may have had, it was wrong and unfounded, and it's all I need to know."

Neny begged off from answering any more questions, saying she really wanted to put this behind her, but PEP tried for a last one: If you bump into Trish again, what do you think your reaction will be? She waves the question away initially. An hour later, she sent this reply: "I will say hello and goodbye in the same breath!"

THE INCIDENT RECALLED. Last November 18, Ilocos Sur Representative Ronald Singson—son of Luis "Chavit" Singson, the wealthy veteran politician who was instrumental in deposing former President Joseph Ejercito Estrada—celebrated his 40th birthday among well-heeled guests at the often-controversial Embassy club. At around 2:00 to 2:30 in the morning of November 19, when the party was winding down, guests were stunned by the sight of one of them crying out for help.

Just meters outside Embassy, where a Christmas tree stood, Neny Montinola, a guest at the same party, was seen groping her way around, saying, "I can't see! I can't see! My eyes are burning!" She was in a panic and clearly in pain. Coming to her rescue, some guests grabbed hold of water, put the water in glasses and a bucket, and threw it at her. Neny was drenched, but the water was clearly not helping because she still moaned about the stinging pain in her eyes. At one point, she was crouching on the ground, in panic.

Taking matters into their hands, movie stars Angelu de Leon and Maricar de Mesa, who had shared a table with Neny at the party, rushed Neny to the Makati Medical Center, the closest hospital to The Fort. Angelu sped away, said one witness approvingly, "like a madwoman," with Neny beside her, while Maricar followed in another car.

Quoting the doctor at Makati Medical Center's emergency room, Angelu said, "'Good thing nakakontak [lens] siya kasi direct hit sa mata yung pepper spray, e. Possible na ma-damage yung cornea.'" That was also when she found out that the foul smell at the party, which she thought at first to be "ammonia," was from a pepper spray.

Neither Angelu nor Maricar actually saw the pepper-spraying itself. They said they were saying goodbye to friends at the time. They began heading toward the same exit only after a very foul stench began to fill the club. This odor, Angelu would later realize, was chemical from the pepper spray.

THE PEPPER-SPRAYING. According to witnesses interviewed by PEP, the actual attack happened between 2 a.m. to 2:30 a.m. of November 19. At that hour, Neny had walked toward the club exit. Trish did, too. And so did a few others, like Ricardo, who were scattered in the relatively narrow space closest to the door.

Then Trish moved close to Neny and held her in a hug. One witness said this was strange because the two were not close, and were "mere acquaintances." Seconds later, the witness said she saw Trish pointing the pepper spray up in the air, toward no one in particular. Then Trish pointed it again, this time toward Neny, spraying it directly in Neny's face. After this, the witness said, Trish walked out of the club "alone, casually." Ricardo, who had been saying goodbye to friends, followed her soon after.

THE SUSPECT. Soon, a few more guests began dropping the name of Trish as the "culprit" and "the one who did it."

Trish herself remained silent, except for one phone call to PEP, when she told its managing editor Karen Pagsolingan that she wanted the story killed. When it became clear that PEP would carry the story, she left her boyfriend and date at the Singson party, Ricardo Po, Jr., to answer for her.

On November 26, or seven days after the incident, Ricardo sat down with PEP. A well-mannered and charming man, Ricardo comes from a family with high-stakes investments in food manufacturing and exporting. He has children from a marriage that has been annulled, and is, as our interview made apparent, smitten with Patricia.

He told us that he never saw the incident, and also said that he could not imagine Trish being capable of such an attack. "Trish is not the type that carries weapons. She's not the type. No need." He said he confronted Trish about it after he got a call saying Neny had landed in the hospital and that Trish was a suspect, but that Trish told him, "I don't carry tear gas in my bag."

THE MOTIVE. These days, it is outside players giving answers to the nagging question: Why did this happen?

A blog claiming to know the inside story says that "jealousy" is the reason. Hong Kong-based Kitty Go's blog says that, at a time Trish and Ricardo were having problems, the "lover of sprayer went to Boracay with the victim and a group of friends."

But a friend of Neny has dismissed the story of Neny and Ricardo vacationing in Boracay together. "Not true," she says categorically, "because they have not spoken to each other for more than a year."

A guest at the Embassy party, who says she witnessed the pepper-spraying, insists that Neny does not see herself anywhere in the picture with Trish and Ricardo. This is why, she says, when the pepper-spraying happened: "Clueless si Neny nung nangyari yun. She really didn't see it coming."

Another party guest who claims to know all three—Neny, Trish, and Ricardo—does speculate: "Ricardo has been vocal about his appreciation of Neny's beauty, and probably, he made a comment which irked Patricia that night."

But hearing that the two women have finally resolved things between them, the guest chooses to end her commentary with: "I am happy for Neny. Now, she can forget about such an unpleasant experience. I hope Patricia is well and concentrates on the things that matter in life."

—With reports from Karen A. Pagsolingan