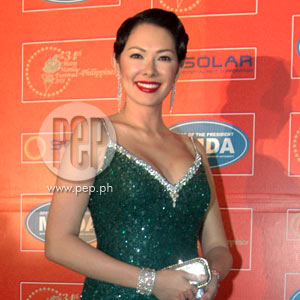 Ruffa Gutierrez looked lovely as she walked down the red carpet during the Metro Manila Film Festival Gabi ng Parangal last December 27 while wearing a Rajo Laurel creation. She revealed that she was a bit sad, however, since the awards night of the 34th Metro Manila Film Festival meant that their days of promoting the sequel of Desperadas was about to end soon. The MMFF is scheduled to end by January 7.

"Desperadas 2 is very controversial because of all the stars involved but among ourselves, we really get along. Now that the movie is over, I leave it with a heavy heart because ma-mi-miss ko yung mga kasamahan ko sa movie."

Are they planning to do Desperadas 3? "Why not? Pero sana naman sa Part 3, hindi na ko makulong! Sana may high-powered attorney na ako na puwede akong ipagtanggol," she quipped, referring to her character Isabella, who has been sent to jail in the two installments of this Regal Entertainment movie.

Did her two young daughters, Lorin and Venice, watch this comedy film even though it has some sexual undertones? "They watched the movie but I made sure that in the scenes when they were on the bed or there were maseselan scenes, I made sure that the yayas would cover their eyes. But they're really like that. Everytime they pass by EDSA and they see Piolo [Pascual] without a shirt or Dingdong [Dantes] without a shirt, they always cover their eyes because they're very conservative."

Are her kids showing signs of entering show business in the future? "I think so because every time they hear the song nina Sarah Geronimo and John Lloyd Cruz, "A Very Special Love," kanta sila nang kanta, with feelings pa ha! So they really, really love the song. Baka i-enroll ko uli sa Trumpets..."

Will it be okay with her if they do enter the world of showbiz? "Siguro tama na muna ang theater saka commercials and photo shoots but I'll really encourage them na tapusin muna ang pag-aaral nila."

She then told PEP (Philippine Entertainment Portal) how she spent her Christmas this year. "I spent it with my family, nag-Noche Buena lang kami sa bahay and we had a party until 4 in the morning. Nagpa-cater kami and sama-sama kami nagbukas ng gifts. We had friends who came to visit us. It was a very small family affair, nag-bonding kaming magkakapatid."

Did Yilmaz contact her during the holiday season? "He sent me an email and he said, ‘Merry Christmas Ruffy and Happy New Year. He's back to calling me Ruffy, hindi na Mama Smurf," she joked.

At the time she and her former husband were trading verbal tirades at each other through the media, the Turkish businessman referred to her in text messages as Mama Smurf.

She continued: "He called Lorin and Venice [their two daughters] and nag-usap sila for an hour."

Ruffa also happily informed PEP that viewers will still be seeing her as Daniella since I Love Betty La Fea will continue airing on ABS-CBN until July 2009. The primetime show, starring Bea Alonzo and John Lloyd Cruz, was supposed to end on April but management decided to extend it for its good performance.
Read Next
Read More Stories About
I Love Betty La Fea, Ruffa Gutierrez, Yilmaz Bektas
Celebrity Updates