Dr. Manny Calayan says John Lapus is lined up for next campaign 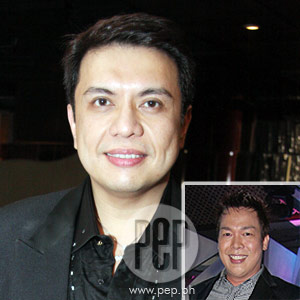 The prominent billboard, which was launched late last year, features the celebrity endorsers of the company—Boy Abunda, Pia Guanio and the Coverboys, among others—all gathered under the slogan, "To C Is To Believe."

Conspicuously absent, however, is Showbiz Central co-host John "Sweet" Lapus, who has been a well-known supporter of the popular cosmetic surgery clinic for two years. Speculation even had it that Boy Abunda was behind the apparent snub, owing to the reported longstanding conflict between the two.

BOY VERSUS SWEET. It will be recalled that last July 2, 2007—in Showbiz Central—Sweet disclosed how the gap with The Buzz host started.

Boy was dragged into the picture when Sweet discovered through a mobile phone tracking device that Jasper was a frequent guest at talent manager's abode. But the ex-boyfriend explained that he was simply asking Boy to help jumpstart his showbiz career.

The two hosts made peace that same year, but they are still not on speaking terms.

And a year later, the rift was believed to be resurrected. Boy, who was allegedly involved in the ad's planning stages, was said to have excluded Sweet in the billboard intentionally.

The issue was further discussed in the January 4, 2009 episode of Showbiz Central when John was directly asked if he personally felt that Boy had a hand on the controversy.

The comment reportedly slighted Boy Abunda, prompting him to call manager-host Lolit Solis to vent out his disappointment.

There were even unconfirmed reports that Boy had plans of resorting to legal options.

Here is Dr. Manny's written explanation on the issue:

2. Naka-line up talaga si John for the next batch of campaign na ang kasama naman niya halos is taga GMA- 7.