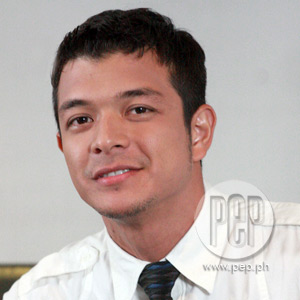 Year 2009 is coming up roses for actor Jericho Rosales. Fresh from the success of the critically-acclaimed film Baler in the recently concluded 34th Metro Manila Film Festival, Jericho will now be seen in ABS-CBN's I Love Betty La Fea, where he will portray the character of Aldo.

Echo's participation in the franchised romantic comedy soap will not just pit him next to fellow Kapamilya actor John Lloyd Cruz, but also against ex-flame Heart Evangelista. A report recently came out saying that I Love Betty La Fea and Heart's own series in the rival network will share the same timeslot, consequently pitting the two former lovers in the primetime bracket.

"Betty La Fea is a Bea Alonzo show, Bea and John Lloyd show, and I'm one of the new characters na papasok dun sa Betty La Fea, and I hate putting pressure on myself. I think in Luna Mystika, Heart Evangelista has her own following and Betty La Fea has her own following din. And for me, I'm just playing my character and I'm just working," Echo told the entertainment press last night, January 15, during a solo press conference prepared by the Kapamilya Network.

BUMPING INTO HEART. Jericho confirmed that a chance meeting did occur between him and Heart recently.

"I didn't see her family, but siya lang," he clarified. They only managed to exchange a quick "hi and hello" before going their separate ways.

The two haven't seen each other for quite a long time following their breakup last year, making the encounter uncomfortable presumably for both parties.

Echo maintained that he's not yet ready to enter a new relationship. But that doesn't mean he is still in love with the woman whom he loved ardently for three years.

LOVELESS STILL. Most of Jericho's past girlfriends came from show business and the breakdown of his most recent relationship prompted others to wonder if he would rather have a non-showbiz steady from now on.

What are the chances of him courting Bea?

"All things are possible naman I think. Basta work first."

Currently being linked to a number of women—ex-flame Kristine Hermosa, KC Concepcion, Malaysian actress Carmen Soo, and Karylle—Jericho blushingly expressed admiration for all of them. He said though that he's more overwhelmed by the opportunity to work with them.

"I came from a breakup myself. A three-year relationship, di ba, na intense? It wouldn't be fair kung meron akong liligawan at this time, kasi baka rebound ‘yong mangyari. So for now, I'm really happy and it's just fulfilling to work with them."

Karylle's name is the most frequently brought up by the entertainment press.

Referring to the daughter of Zsa Zsa Padilla and his present feelings, Jericho stated: "There's something about K. I think she's a very beautiful woman and she's got a good head on her shoulders, and talagang when she's around, meron siyang aura na okay.

"And there's nothing wrong if kunwari I court anyone because I'm single. But just like I've said, I'm not courting at the moment. So medyo relax lang muna."