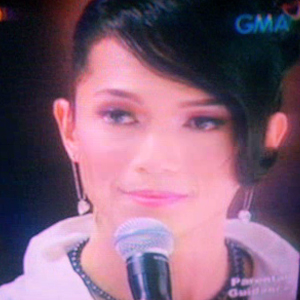 There is a deeper meaning to Rustom Padilla's new name. Bebe stands for his new motto, "Be all what you can be."

Rustom Padilla came back from a three-month stay in the U.S. last Thursday, January 15. Rustom, who studied modeling in New York, surprised Startalk at the airport with his feminine classy look and ramp-model bearing.

When Startalk got hold of Rustom, the first thing they asked was whether airport officials had any difficulty distinguishing him and his passport photo.

Rustom has taken his sexual preference to a new level by changing his name to suit his lifestyle.

"I'm a woman, so, call me Bebe [pronounced, "bibi"]," the artist known as Rustom Padilla told Startalk. "I'd really appreciate it if you call me Bebe. Rustom's not here. Bebe's here, she's alive and kicking! Bebe's a character that people are gonna watch and I'm gonna portray...so, Bebe's here to stay."

Bebe is short for Binibining Gandanghari, and it's a role Rustom definitely wants to portray.

"That's my name," Bebe said. "She is a God-fearing, loving lady. I am a woman. I am a woman. Bebe's a woman...Emotionally, physically, biologically, spiritually, psychologically, socially..." at this point, Bebe's seriousness faded and he quipped, "Ano pa ang gusto mo, financially?"

Though a lot has changed in Bebe's overall physique, he didn't comment on whether he was drinking estrogen pills or has undergone any operation. At this time, he can be proud of his vital statistics. "I think it's 35-26-35," he said.

Will Bebe's family react once he sees them?

"I'm sure everything will be fine," said Bebe. "Wala naman akong sinasaktan na tao. Wala naman akong ginagawang masama. I do my own decisions and as long as I know that it is responsible, I'm only asking for pang-unawa."

WALKING THE RAMP AT STARTALK. Bebe guests today live at Startalk to talk about his plans now that he's back home. Startalk's Butch Francisco gives a welcome remark ("Long live, Bebe!") as Bebe goes onstage to give the viewers a taste of New York style modeling.

Once seated, Joey de Leon immediately went for the "Question": Has he undergone a sex change operation?

"I'd rather not comment about it sa mga panahon na ito," Bebe said. "So, I hope napagbibigyan n'yo ako doon."

But for now, is Bebe willing to undergo a sex change?

"That's a hard decision, so I'd rather not talk about it," said Bebe. "I'm in the middle of everything."

Did he decline now to have it?

Bebe laughed and explained, "Actually, my full name is Binibining Gandanghari. So, my nickname is Bebe."

"I was born with it," quipped Bebe.

NEW YORK STINT. Bebe related how big the preparation was in his travel and study in New York. "I used to be big before," he explained, referring to his body structure. "So, physically, I had training and did a lot of Pilates para lang mag-change ang structure ko. And then, may training din sa modeling para matuto yung paglalakad. It's not easy."

By the looks of it, Bebe definitely succeeded in his goal since he is no longer recognizable as Rustom Padilla—the handsome dramatic actor who was formerly married to actress Carmina Villaroel and brother to action star Robin Padilla.

So, what made Rustom change his name to Bebe?

During his time in New York, did Bebe take any drugs or medication to make him look more feminine?

CARMINA AND ZOREN. Lolit could no longer contain her curiosity and blurted out that Bebe looked like Carmina.

Bebe laughed. "Hindi, gusto ko, silang dalawa. They have to be together and they'll live happily ever after. That's my wish for them."

So, if ever Bebe falls in love with an actor, who would it be?

"Shy ako," gushed Bebe. "But, you know what, siyempre yung gusto mo yung someone responsible. Someone who'll inspire you."

If Bebe would do a Zoren Legaspi-directed film with Carmina Villaroel, what roles would he and Carmina play?

BEBE'S LOVE AND FAMILY LIFE. Is there anything romantic happening right now in Bebe's life?

"Hindi pa, e," said Bebe. "Secret muna. I'd rather not comment about it because it's not happening yet. Nasa stage pa lang na I'm not even sure."

However, since Bebe's writing a tell-all book, would he include his love life?

How did Bebe's family react when he said that Rustom was dead and Bebe is here to stay?

Mommy Eva however, had only advice for her Bebe.

Bebe, who got the message, said "I hope she'll be happy. Rest assured, I'll be a good girl."

"Well, siguro feeling niya, when you're in this kind of life," explained Bebe, "you tend to be promiscuous. You tend to be sexually active. That's not the case. I value relationships, and I value yung connection ng tao. And I don't think it's bad."

Does Bebe have any plans about settling down in the near future?

IDEAL MODELS. Bebe said that he wanted to be like his fashion icon Audrey Hepburn. Locally, he looks up to Melanie Marquez, another modeling icon.

EXCITING CHANGES IN CAREER. Now that Bebe's back, what does he have in store for the public?

In TV, will he appear as Bebe?

Right now, is Bebe missing anything about Rustom Padilla?

Now that Rustom is long gone, what does Bebe have to say to the public?

Bebe calmly said, "Life is short, and do not be afraid to be who you are and what you are because that's the only way to happiness. Only God can see your heart, and that's the most important thing."