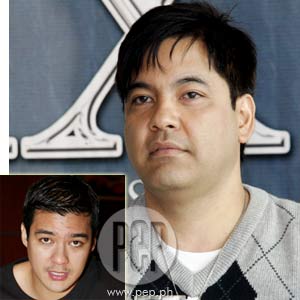 The breakup of Jomari Yllana (inset) and Pops Fernandez has started a word war between Jomari and Pops's ex-husband Martin Nievera (main photo). This began after Martin remarked, "He [Jomari] is not okay with me now for hurting Pops and being so mysterious."

After the show, Jomari told PEP (Philippine Entertainment Portal) that Martin is free to react on his statement.

A few hours later, as expected, Martin responded to Jomari's statement. This time, Martin adhered to the latter's request for him to stay out of the breakup issue.

In a message sent to The Buzz yesterday, March 15, Martin said:

"There was a time I would jump all over this kind of intrigue. I mean, it's not like me not to react, but let me, for the first time not be me and not react. But let me say this, I have never said anything bad or disrespectful in any comments made about the breakup or about Jom. I will not start now.

"He is right, no one should be commenting on their breakup, so let's just tell them, tell us what they want us to know and respect their privacy. Besides, he didn't breakup with me, right?

"Well then, maybe he should be the one defending Pops on TV instead of me. So, this is not me making a comment. Let's just leave the two to sort out their own problems and wait and see what they are willing to share with all of us."

It can be recalled that Jomari first broke the news about his breakup with Pops after four years of being together. He said that it was probably "irreconcilable differences" that triggered their split. (Click here to read related article.)

A few days after, Pops said that she was shocked by their breakup. She said, "I didn't expect it, I didn't see it coming. Maybe it was due to pressures before, during, and after the concert [Missing You, reunion concert with Martin, which was produced by Jomari]. I don't know. I am clueless." (Click here to read related article.)