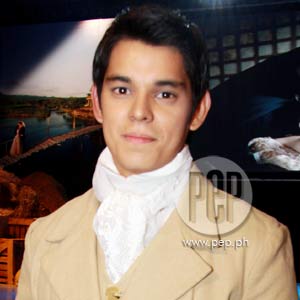 The rift between his mom, Annabelle Rama and GMA-7 SVP for entertainment, Ms. Wilma Galvante, did nothing to affect Richard's relationship with the network. "Wala," stressed Richard. "Ako, personally wala akong problema."

Annabelle's son, Richard Gutierrez, plays the lead role of the iconic noble swordsman who defends the townfolk against villains and unjust officials.

The Kapuso Network drummed up the hype last night, March 16, by staging a presscon complete with grand production design staged at the spacious Studio 7 of the GMA Network Studios in Quezon City.

The feisty Gutierrez matriarch was reportedly impressed and touched with what she saw, prompting her to burst into tears while in the middle of the presentation.

Richard was not able to greet his mom and even Ms. Wilma during the press conference as he was busy preparing for the presentation and chatting with members of the entertainment press.

During the height of the word war between the two parties, Richard along with the cast and crew of Zorro were all stationed most of the time in Bagac, Bataan, making it difficult for the 25-year-old actor to catch up on what was happening in Manila.

If the opportunity presents itself, Richard said he's willing to act as mediator to resolve the strife.

That probable scenario, however, would have to wait according to Richard. And just like his brother, Raymond Gutierrez, the Zorro lead star remains optimistic that the warring parties will someday bury the hatchet for good.