Gretchen Barretto on Nadia Montenegro: "I will always care for her." 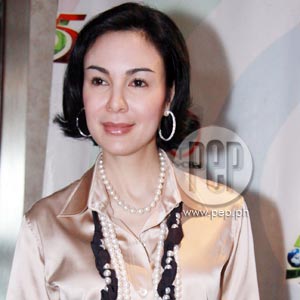 "Oh, yes, yes, yes," Gretchen Barretto animatedly replied when asked if she had already forgiven erstwhile friend, Nadia Montenegro. The two old friends had a much publicized falling out early last year, which reportedly came to a head in a hotel confrontation.

For Gretchen Barretto, the bitter incident that led to the fallout of her friendship with former actress Nadia Montenegro is now water under the bridge.

"It's been a year since that incident na nag-away-away kami. Tapos na 'yon para sa 'kin," said Gretchen before her contract signing with Star Records yesterday, March 24, held at the 9501 restaurant in ABS-CBN, Quezon City. Gretchen has a new album titled Complicated, the follow-up to her debut disc Unexpected (2008).

It was February of last year when reports came out that the two had a heated confrontation inside a hotel. Gretchen and Nadia used to be good friends until La Greta allegedly accused Nadia of spreading malicious rumors against her.

Gretchen—who is in a long-term relationship with business magnate Tonyboy Cojuangco—was rumored to be carrying an affair with Dody Puno, executive director of the Department of Public Works and Highways. The supposed relationship made public news and Nadia was purportedly adding fuel to the fire by feeding various speculations to close friends and acquaintances.

PEP (Philippine Entertainment Portal) touched on the subject in an exclusive interview with Nadia published on October 2006. (Click here to read related article.)

"THAT'S WHAT FRIENDS ARE FOR." The furor brought by the confrontation eventually subsided mainly because both parties chose to avoid discussing their supposed rift to the media as time went by.

Nadia recently had an eye operation to repair a torn retina in her left eye. In a conversation with PEP last February 26 at the Lago Del Rey in Camarines Sur, Nadia revealed going through two painstaking operations to correct the malady.

Despite their conflict, Gretchen—when asked for her reaction on Nadia's current health dilemma—extended sympathy to her old friend by saying: "You know it's a cliché but everybody says napakaikli ng buhay. Life is fleeting [and] it's always good to just forgive. Of course, there are things na hindi natin puwede kalimutan but to forgive, para sa akin, is important."