Kris Aquino has yet to speak with Korina Sanchez 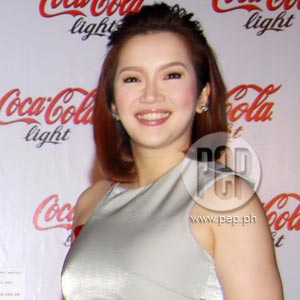 Kris Aquino no longer minds the issue about the "surprise interview" of Willie Revillame with Sen. Mar Roxas and Korina Sanchez on Wowowee, where they officially announced their engagement. Kris also clarifies that she holds no grudge against the noontime show host.

Kris Aquino was named by Coke Light as one of its "Passionistas" for her continuous support to the advocacy organization World Vision.

In the event Coke Light Toast to Passionistas held yesterday, May 14, at the Ayala Museum in Makati City, Kris and other personalities were honored by the famous beverage for their remarkable passion to make a difference in society. Joining Kris were actress-singer Agot Isidro for the Philippine Animal Welfare Society, socialite Tessa Prieto-Valdes for the Philippine National Red Cross, Mons Romulo-Tantoco for the Pink for Life Foundation, Tessa Herrera for the Trees for the Future, and Dr. Aivee Aguilar-Teo for the Manila Boys Town.

Kris said, "Coke Light is giving them P100,000 and I'm matching it from my own pocket. So may P200,000 sa kanila. But, 'yon nga, I think if I'm not mistaken, it takes P7,200 pesos a year to support one scholar. So last year, I had more than 70 scholars from my own. So ngayon, thank you sa Coke Light, at least, kasi madadagdagan pa 'yon." Kris explained this during an intimate interview with PEP (Philippine Entertainment Portal) and select members of the entertainment press.

Unknown to many, Kris has been supporting the organization for six years. "I've long been a supporter of World Vision, in fact, six years na. Last year, I had more than 70 scholars na rin, and because of Coke Light, at least tuluy-tuloy ang pagbibigay ng scholarship."

The TV host added that this was her way of giving back to the public for all the success she has enjoyed in her career.

"I try every year to tithe," she said, "but nakalagay naman sa tithing is it's not necessarily sa Church. You can choose another organization na alam mong tutulong sa iba."

And one of the organizations she chose to help is this cause-oriented organization, which focuses on the education of underprivileged children.

ON WILLIE'S INTERVIEW WITH KORINA AND MAR. During the short chat with Kris, the entertainment press could not avoid asking her about the issue of Willie Revillame's interview with newly engaged couple Senator Mar Roxas and broadcaster Korina Sanchez.

Willie already sent his apologies to Kris, who had expressed disappointment over the announcement of Sen. Roxas and Korina's engagement being made in Wowowee on April 25. Kris had expected the announcement to be made in SNN (Showbiz News Ngayon), which she co-hosts with Boy Abunda. (Click here to read related article)

Kris said yesterday that she has no ill feeling towards the Wowowee host.

"Wala at all," she stated. "When I saw his groundbreaking, sa TV Patrol also, nag-text pa ako to congratulate him. And my gosh, he gave us a phenomenal rating sa SNN by sharing his yacht! So, I'll never forget that for the rest of my life."

On the other hand, when asked her if she still has "tampo" toward Korina, the talk-show host just smiled, then said she has not yet talked to Korina personally. "We haven't talked. In person, ha, we have not."

After the interview, PEP asked Kris if there are still plans for her to conduct an interview with Sen. Roxas and Korina on one of her shows. She simply replied: "Wala. Sa ngayon, wala pa."