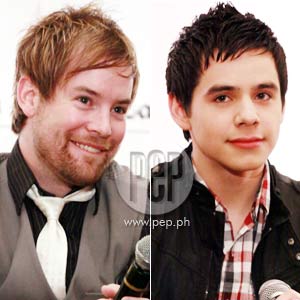 American Idol winner David Cook (left) and his runner-up, David Archuleta (right), got a very warm response from the Filipinos throughout their four-day stay here in the Philippines.

All is set for the back-to-back concert of American Idol Season 7 winner David Cook and runner-up David Archuleta tonight, May 16, at the SM Mall of Asia Concert Grounds. And based on the reception that the two Davids have been getting from Filipino audiences during their live guestings and live performances, their concert is destined to become one of the biggest concerts this year.

Two nights before their concert, on May 14, Cook and Archuleta met the press at the Isla Ballroom of Edsa Shangri-La Hotel in Mandaluyong City. The two singers gladly answered all questions from the press, while the press gladly pursued its curiosity about these American idols, now also Filipino idols.

TWO DAVIDS. Months before they arrived in Manila, there was already talk that David Cook and David Archuleta would visit the country and do concerts—but separately. So when Fearless Productions, the concert producer, announced that they would be bringing not one but two Davids to Manila in one concert, all American Idol fanatics here in the Philippines rejoiced.

PEP (Philippine Entertainment Portal) asked the two Davids what made them agree to do a concert here in the Philippines.

"The fact of the reason is they asked," David Cook said matter-of-factly. "I mean, as I've said a lot in my interviews, and I mean what I say, I just wanna play anywhere, everywhere... So when the question was brought up, it's like an easy guess. I mean, to travel half around the world, that's awesome!"

The younger of the two, David Archuleta, pretty much agreed with his namesake. He did add: "Just you know, being able to give something back to the fans here... The Filipinos are definitely big supporters of American Idol. It's really great to be able to come here and do a show for them."

What was their impression of the Philippines before coming here?

"There were two people who gave me a little bit of info about the Philippines before I got here—an old high school friend of mine who traveled and studied in Manila, and Ramiele Malubay from the show [American Idol]. Basically, they told me how beautiful this country is and how nice the people are... They're very nice," David said with a smile.

But both Davids had no idea how big they were here until they saw for themselves the screaming and the crowding that their presence created among Filipino fans.

Cook told the press about his and Archuleta's experience when they tried to go to a mall just across the place they were staying at. "There's maybe a hundred and two people following us at the mall, and that doesn't happen at home. It was really very humbling," he related.

But this was nothing compared to the very warm welcome they got when they appeared in a couple of TV shows on GMA-7 and on their mall tours. From these experiences, there is great expectation that their concert tonight will have a huge turnout.

THE NEXT AMERICAN IDOL. Many American Idol fans consider the seventh edition as the best season ever, when Cook and Archuleta battled it out in the finals. In the end, however, it was the 26-year-old Cook who won over the 18-year-old Archuleta.

At this time last year, they were in the finals of American Idol. This year, on the 8th season of the most popular talent show in the United States, Adam Lambert and Kris Allen will face-off in the finals to determine who between them will be crowned the next American Idol.

PEP asked the two Davids who they think would win and why.

"It's really tough for both of us... I got this theory that the same person that wins every year is Simon Cowell!" Cook quipped.

Archuleta, on the other hand, said: "I haven't really been able to watch all the shows... I think they're both great. I'm really impressed, for both have skills in different ways of music, and I'm really interested in seeing where both of them will go... They're really talented guys."

THE PRICE OF SUCCESS. After their American Idol stint, both Cook and Archuleta have been busy touring the world to promote their respective self-titled albums. What is the hardest part of being where they are now—successful international recording artists?

Cook: "I'm very close to my family... I think I can speak for the two of us. We've all been given an amazing level of support from our family that allows us to do stuff like this, to be able to chase this stuff while we're young and have the opportunity."

Archuleta: "You know, one thing that's really difficult was being away from home, being away from my family. I love traveling and stuff, and it's always a lot of fun. But just being able to hang out with your brothers and sisters and friends, it's always fun. I feel kinda bad sometimes, like, 'Oh, I'm missing out...' You know?"

Someone asked, what's the best thing about being David Cook?

The older David replied, "The best thing about being David Cook right now, honestly, is the same thing that was best in me two years ago, I don't know... This is all amazing, it's great. But it's a phase, you know what I mean? I certainly want this to last for a long time, but it can easily fall apart tomorrow.

"I got great friends, great family. They really don't care. So the people I get in tow, they'll be the first people who kinda keep me in check. So I don't wanna get caught up in this that much."

What song best describes their life now or a song that they can relate to?

Cook mentioned "Living in the Fast Lane" by the Eagles, while Archuleta answered "These Words" by Natasha Bedingfield.

Click here to read more about the two Davids and here to see more photos.