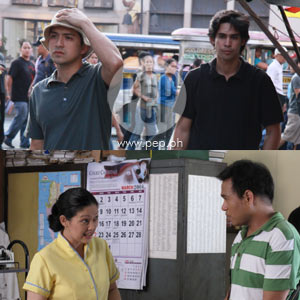 (Top frame) Dennis Trillo and Paolo Paraiso are two of the tough guys in the Cinemalaya entry Astig. (Bottom frame) Maricel Soriano makes a cameo role in the film Last Supper No. 3 starring Joey Paras. Watch these films during the fifth Cinemalaya that will take place at the CCP from July 17-26.

The Cinemalaya Philippine Independent Film Festival is the first in the country to give out the highly coveted NETPAC Award.

The Network for the Promotion of Asian Cinema (NETPAC) is an international, non-profit organization composed of Asian critics, film educators and festival organizers. The group gives out its award in select international film festivals to promote Asian cinema by choosing exceptional films and discovering new talents.

The latest Filipino filmmaker to receive this prestigious award was Tara Illenberger. She directed the Cinemalaya entry Brutus that won the NETPAC Award in the Louis Vuitton Hawaii International Film Festival in 2008.

Cinemalaya competition director Laurice Guillen announced this yesterday, May 21, during the grand press conference of the annual filmfest at the Cultural Center of the Philippines Main Lobby.

Now on its fifth year, Cinemalaya 2009 will be held at the Cultural Center of the Philippines from July 17-26.

When PEP (Philippine Entertainment Portal) asked Direk Laurice regarding this development, she pointed out that this worldwide organization has been interested in giving out an award when Cinemalaya was just starting out five years ago.

"NETPAC has been trying to be a part of Cinemalaya since the first year. It just so happened that during our first and second year [mahirap] although pareho naman ang budget namin. There is so much more goodwill now generated by Cinemalaya that there are more people who support us.

"On the first year pa lang, nasa jury na namin si Philip Cheah of Singapore and after that, Aruna Vasudev has been campaigning for Cinemalaya to be part of NETPAC."

She is unsure whether or not the said award will come with a cash prize but she points out that being chosen by NETPAC will definitely enhance the image of the film, making it more attractive to distributors worldwide.

Direk Laurice also explained that the NETPAC award will given to one of the films to be exhibited in Cinemalaya 2009. The 10 full-length films in competition are excluded from receiving the honor.


20 FILMS IN COMPETITION. For Cinemalaya Cinco (the fifth edition of the filmfest), there are ten short films and ten full-length films competing for the Balanghai trophy and additional grant from the organizers.

Direk Laurice explained that they experienced a decline in the number of submitted entries this year because of their stringent requirements.

"This year, the requirement was a one-page synopsis of not more than 300 words and detailed treatment of the story. So we had 140 entries for the full-length instead of the usual 200 plus entries. For the short film category, the requirement is much simpler because we received only short films not more than 20 minutes. We received 62 entries this year but only 49 qualified. This is because we were strict this year about the total running time."

For the full-length feature category, the 10 finalists that received a production grant of P500,000 are as follows:

2. Ang Panggagahasa kay Fe by Alvin Yapan - Also called The Rapture of Fe, this film tackles the fate of a woman who is being wooed by a mysterious suitor. Fe (Irma Adlawan) is unsure if it is her abusive husband (played by Nonie Buencamino) or her lover Arturo (TJ Trinidad) giving her baskets of black fruits every morning.

3. Astig (Mga Batang Kalye)by GB Sampedro is an episodic tale of tough guys in Manila whose stories parallel and contrast with the landmarks of the city. Boasting a cast of 50 mainstream stars, this film is divided into segments starring Dennis Trillo, Sid Lucero, and Edgar Allan Guzman.

4. Colorum by Jon Steffan Ballesteros - In this film, an FX driver helps an ex-convict look for his child. Alfred Vargas went on a road trip with Lou Veloso for this movie that was shot in nine destinations of the Philippine "East Coast."

5. Dinig Sana Kita by Mike Sandejas - A deaf dancer and a rocker girl become close to each other while staying in a Baguio camp. Learn more about hearing-impaired performers in this film featuring a special appearance of the band Sugarfree. (Click HERE to read more about Dinig Sana Kita)

6. Engkwentro by Pepe Diokno - Two brothers who are members of opposing gangs must find a way to survive the vigilante group that aims to wipe them out. Will the characters of Felix Roco and Daniel Medrana survive the encounter (engkwentro)?


7. Last Supper No. 3 by Veronica Velasco and Jinky Laurel - This comedy film is based on the true story of a production designer who faced legal troubles when a prop that he used suddenly went missing. Viewers will sympathize with Wilson Nañawa (Joey Paras) as he spends the next two years entangled in bureaucracy and red tape while facing estafa and serious physical injuries.

8. Mangatyanan (The Blood Trail) by Jerrold Tarog is the sequel to his critically acclaimed film Confessional. It shows how a travel photographer tries to get over her traumatic past as a result of being raped by her own father.

9. Nerseri by Vic Acedillo, Jr. - The Felipe family has a history of paranoia, manic-depression and psychosis. When his mother goes to the province, Cocoy (Timothy Mabalot) tries to take care of his older siblings who are all mentally sick. The 12-year-old boy fights for his own sanity in the midst of all the craziness in his life.

10. Sanglaan by Milo Sogueco - This film shows the dependence of Filipinos on pawnshops to make ends meet. Olivia (Tessie Tomas) is trying to keep her business afloat, thus helping the characters of Joem Bascon, Ina Feleo, and Flor Salanga keep their hope alive.