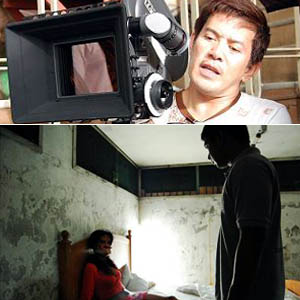 Director Brillante "Dante" Mendoza (above) has declined to have his film, Kinatay, as the opening film of this year's Cinemalaya Film Festival. (Below) Maria Isabel Lopez and Coco Martin in a scene from Kinatay.

The Filipino moviegoing public will not have a chance yet to view the much-talked about film Kinatay (The Execution of P). Director Brillante Mendoza, has declined a proposal to open this year's 5th Cinemalaya Film Festival and Competition with his film.

The film for which Brillante Mendoza won the Best Director award at the 62nd Cannes International Film Festival was among the new Pinoy indie films chosen for the Cinemalaya Filmfest. At press time, it was being deliberated on as the Festival's opening film by a group of industry movers behind the annual event, which is co-sponsored by the Cultural Center of the Philippines (CCP), Econolink Investments, Inc., and the University of the Philippines Film Institute (UPFI).

Billed as Cinemalaya V, the digital fest and competition runs at the CCP from July 17 to June 29.

DELIBERATION. When interviewed by PEP (Philippine Entertainment Portal), Brillante Mendoza acknowledged that the CCP proposal was most welcome and highly anticipated. But, he said, "no word of confirmation" from the Cinemalaya people reached him, and that was when he started to think.

"I-confirm pa daw. Kaso, parang ayaw ko na... Baka UP na lang ako," Brillante said earlier. "I don't see the point why they [the Cinemalaya group] have to deliberate about the film."

As it turned out, not only Brillante Mendoza's Kinatay (The Execution of P) was being considered to open the festival at the CCP. An undisclosed source reveals that three other indies also figured in the deliberation: Raymond Red's Himpapawid, Armando Lao's Biyaheng Lupa, and Adolf Alix Jr. and Raya Martin's Manila.

Neither the undisclosed source's statements nor the CCP-PR spokesperson, Ms. Irene O. Rada, could shed light on the matter.

Ms. Rada of the CCP Corporate PR Deparment said, "It's only Mr. [Nestor] Jardin [CCP President] who will decide, in consultation with Laurice [Guillen] and Robbie [Tan]."

However, from Mendoza's forwarded text message earlier sent to one "Direk" (he could have been referring to Laurice Guillen), a "clearer view" of the situation was revealed.

"Direk, I don't understand," Mendoza pointed out, "how you can have two opening films at the same time. But even so, I don't think our film can make it in time for your fest. Mike Idioma [sound engineer] will have to do the mix from Paris. Our print is already out for other fest. Pass muna po kami, Direk. Thanks po."

Mendoza also forwarded a second text message, sent to one of the Cinemalaya organizers (and program committee members), which, while not actually confirming the Martin-Alix, Jr. "twinbill" Manila as this year's Cinemalaya opening film, indicated the filmmaker's actual decline of the earlier proposal.

"Maybe Manila is more appropriate as your opening film," suggested Direk Brillante. "I hope this will ease the burden of deciding which film should open the festival and protect the image you want for the festival."

The award-winning filmmaker also thanked the CCP people behind this year's Cinemalaya Filmfest, "for considering Kinatay."

"We appreciate it and we wish you the best," Brillante said.

THE OPENING FILM. As pointed out, "no word of confirmation" has reached Mendoza prior to his decline of the proposal, and for that matter, any of the directors of the films being considered as Cinemalaya 2009 opening film.

There are talks, too, about Manila—the Piolo Pascual-lead starrer—being a "difficult choice" to open the CCP event.

"Ayaw ng Star Cinema," the PEP source revealed. "It could hurt the release [of the film] in regular theaters, with August [2009] playdate."

Early talks about Brillante's Kinatay being "too dark," as it tells of the harrowing ordeal a prostitute suffered in the hands of her executioners, and presented in gory detail, must have been a point of contention and effected a "slow deliberation and confirmation" process.

But then, none of these assumptions could be the outright reason for the proposal's decline. Suffice it to say, the people behind this year's Cinemalaya Filmfest, have been discreet about their deliberations.

More than any other year, it's only now, on it's 5th year,]that the choice for the Cinemalaya opening film seems to be rather difficult, unlike in 2005, when Cinemalaya Shorts opened the festival. The following year, the festival opened with with Jeffrey Jeturian's Kubrador (2006); and in the succeeding years, Brillante Mendoza's Foster Child (2007) and Adolf Alix Jr.'s Adela (2008).