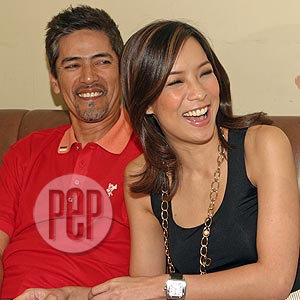 "I have no clue kung saan nanggaling yung balitang yun na nag-break kami. We were pretty shocked ourselves to find out. The plain truth is: We're still together and we're very much going strong, and we're very much in love and happy with each other," says Pia Guanio about the rumored breaup with boyfriend Vic Sotto.

Contrary to rumors circulating in the papers since last week about Eat Bulaga! hosts Vic Sotto and Pia Gaunio's rocky relationship, everything is good and there is completely no basis for it, say the couple.

Vic cleared the air by saying that his relationship with Pia is getting smoother and stronger. He added that with their relationship, only good things will follow. Right now, rumors of a wedding keep getting louder but Vic assured fans that things happen in due time.

Yesterday, June 14, in Showbiz Central, Pia was interviewed by her co-host Mo Twister. Now, regarding that rumor, how true is it? asked Mo.

"I have no clue kung saan nanggaling yung balitang yun na nag-break kami," said Pia. "We were pretty shocked ourselves to find out. The plain truth is: We're still together and we're very much going strong, and we're very much in love and happy with each other."

Rumors come from some little truth. Was there a near breakup or something?

"We've had had our rough patches and even the best ones go through trials," Pia admitted. "I think this proves whether or not you have a strong thing going. You put your relationship on strains and problems and difficulties. If you come out still together after all that, then I think you're pretty much set."

If ever they did break up, would they announce it?

"In the event I think that we arrive in every big decision, be it a breakup or marriage, I think we have no choice," said Pia. "Because Vic has many supporters and we have to announce it because they have been a part of our lives."

Some people may think that if ever Pia and Vic broke up, Pia may disappear from Eat Bulaga! or any other GMA-7 show since Vic, of course, is the "bossing."

"Eat Bulaga! really got a bad rap on that," said Pia. "Kasi they are a company and a family that does not believe in having personal problems getting in the way of work. So, in that sense, whatever you have heard in the past, they are all lies. I would always have to be waived on whether or not I am good for the show and not because I do not happen to be with Vic Sotto."