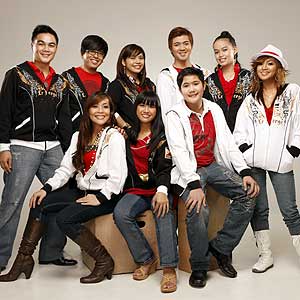 The Philippine delegation for the upcoming World Championships of Performing Arts (WCOPA) was officially announced in a press conference held earlier today, June 25, at the Moomba Bar Café in Quezon City.

Now on its 13th year, the 2009 WCOPA will be held at Westin Bonaventure in Los Angeles, California, on July 11 to 18. The prestigious international competition event held annually gathers the best talents all over the world. Last year's edition saw a total of 40 participating countries, according to STAGES PR man Oliver Oliveros.

Also part of the Pinoy delegation are solo performers Guy Lockwood and Izarzuri Vidal, along with group vocalists Kulay Pikata and Young Voices of the Philippines Quartet.

The Philippines, interestingly, will also send 2009 Department of Education (DepEd) Mr. Philippines Youth Bryann Foronda to compete in the photo and spokesmodeling event.

"We're very glad to also announce to you that this year's group is the biggest na madadala namin sa U.S.," Carlo Orosa of STAGES told the entertainment press. Carlo made special mention of President Gloria Macapagal-Arroyo—who has, through the President's Social Fund, shelled out monetary support to help the Pinoy contingent. Carlo also mentioned the apparel brand, Le Froge, as a supporter of the local contingent.

"I know it's a difficult year for the world, pero for some reason we're so blessed dahil kahit papaano, tama talaga, if there's a will, there's a way, makakahanap at makakahanap din tayo ng funding."