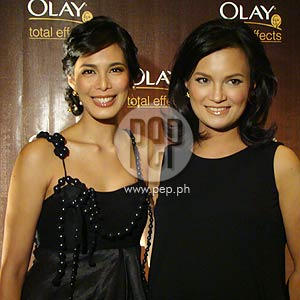 Angel Aquino (left) and Daphne Oseña (right) excitedly related to PEP (Philippine Entertainment Portal) their reunion with their former F! co-host Cher Calvin (not in photo), who is now a reporter in a local TV station in Los Angeles. She will join Angel and Daphne, who are both Olay Total Effects ambassadors, at the swapping event of Olay Total Effects, SM Megamall on August 29.

Many years after the fashion magazine show F! aired its final episode, actress and TV host Angel Aquino was reunited with one of her co-hosts on the show, Daphne Oseña-Paez. Angel joined Daphne as ambassador for Olay Total Effects. The event was held yesterday, July 14, at the Mandarin Oriental Manila in Makati City.

"You know, this is the first time to be together!" exclaimed Daphne as Angel sat beside her onstage.

Angel and Daphne, together with Cher Clavin, built a personal relationship with each other when they were still hosting the late-night weekend program of ABS-CBN called F!, which started in 1999.

After seven years, the three F! girls went their separate ways—Angel is now part of the magazine show called Us Girls on Studio 23; Daphne is busy hosting her infotainment program called Urban Zone on ABS-CBN; and Cher, who once worked with the international media outfit CNN, is now a reporter in the TV station KTLA in Los Angeles.

Angel expressed how much she missed Daphne. She said, "After F, we would try to see each other at least once a year, you know. But every time we would bump into each other or try to meet up, that becomes an appointment to each other because we're both so busy.

"We realized how much catching up we need to do and how much we need to see each other, especially when I saw her pregnant with her first [child]. And I saw Sophia grow up to be the beautiful girl that she is now. After Sophia, it's Lily [Daphne's daughters with former The Correspondents host Patrick Paez]. There are so many events unfolding down in life. So every time something big happens, I always wish that I can be there."

Angel also told PEP (Philippine Entertainment Portal) that their new endorsement will be a sort of reunion for them since Cher is coming over to the Philippines for Olay Total Effects swapping event on August 29 at SM Megamall.

"We're both excited, we haven't seen her for a long time," said Angel.

Daphne added, "It's a reunion kasi F! started in 1999. And if you think about it, we really grew up [together], 'nene' pa kami noon, di ba? And now, may mga anak na, family. You know, Cher is an international newscaster, and Angel, of course, has her own achievements. You know, F! is not just a show to us, it was really a life back then. We were sharing... ang liit ng kotse natin noon, ng apartment. For me, it was really part of my life."

When the three of them get together, Angel said that there would be "a lot of catching up, a lot of time together." She added, "I've been looking at our out-of-town pictures because we had most fun when we went out of town, the pictures are really amazing. We'll probably run that during the reunion."

Daphne said, "We look forward to the togetherness. You know, we had fun, the three of us, like crazy times. And it's amazing that up to now, you know, we've moved on from F!... But when people come up to us, it's still F! that they remember. And it's so nice to be a part of something with three different girls, three different women, have grown on their own and can still be friends again."

Angel added, "And we were part of a lot other people's lives!"