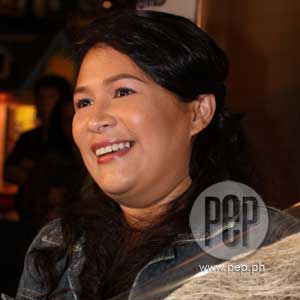 Actress Janice de Belen will be part of the upcoming GMA-7 soap Darna with Marian Rivera. The 40-year-old actress will play the mother of Valentina, Darna's nemesis, to be played by Iwa Moto.

Actress-TV host Janice de Belen felt very excited to talk about her first indie movie, The Last Viewing, which had a premiere yesterday, July 28, in SM Megamall Cinema 6. The actress said she even arrived earlier than the scheduled time.

The Last Viewing is a drama about a crematory supervisor, played by Janice, who loses her daughter. Janice said she initially hesitated to do the movie because she feared there would be bold scenes.

She told PEP (Philippine Entertainment Portal), however, that her hesitation lifted after director Ronaldo Bertubin (Sikil, Kurap) discussed the story with her.

The Last Viewing is also Janice's comeback movie, after a stint in Jolina Magdangal's Annie Batungbakal last 2004. Did she have a hard time going back to heavy-drama acting?

JOHN ESTRADA. PEP also asked Janice about the latest news between her and John Estrada, her estranged husband of more than 10 years. Yesterday, PEP published John's comments about Janice's simple greeting to his current girlfriend Priscilla Meirelles during the celebration of Douglas Quijano's 40th day and 65th birthday. Janice and John were both talents of the late manager. (Click HERE to read related story.)

According to Janice, she approached Priscilla because she wanted to put the Brazilian beauty queen at ease.

The former child star added that the greeting was just her way of recognizing Priscilla's efforts to treat her kids very well.

Would she disagree if John and Priscilla decide to tie the knot?

But why did she declare that she's not ready to work with John Estrada yet?

Can a reconciliation happen in the future?