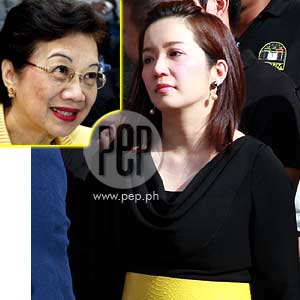 Actress-TV host Kris Aquino was emotional as she recalled the final moments of her mother, former President Corazon Cojuangco Aquino, 76, who died last Saturday after a long battle against colon cancer.

In an interview with GMA-7's Jessica Soho aired last night in 24 Oras, Kris said she finds it hard to believe that her mother is really gone.

"You asked me yesterday why I was okay, kasi parang it wasn't real," Kris said. "And then kanina, when I was writing everything down, dun naging totoo... Yun 'yong time na talagang naiiyak na ako, kasi parang sabi ko, ngayon na alam na ng lahat, totoo na, and she's not coming back."

The SNN and The Buzz host also shared that she still does not know how they will be able to enjoy the next family celebrations without Cory.

"I was telling Ate [Ballsy], 'Ate, I think masa-sad tayo talaga not during the mga death anniversaries, but we'll be sad sa Christmas, sa birthdays. And honestly, yun yung iniisip ko talaga na how are we all gonna feel. Kasi she was always there, Jessica," she explained.

Kris continues to be strong, however, due to the love and support that Filipinos are giving her family—for which she is very grateful.

KINDNESS UNTIL THE END. According to Kris, Cory Aquino continued to be a kind person even up to her death, even arranging for the welfare of the helpers and bodyguards she would leave behind.

"Binilin niya na yung sasakyan ibigay namin sa isa niyang driver who was there since I was four years old, he's been with us for 34 years. Binilin niya na yung mga guards niya, there are two of them who came from PSG pa, that we should take care of their retirement na 'wag naming pababayaan. She made bilin na yung two other household help niya in her house nga to tell Noy to absorb them," Kris narrated.

At this point, Kris commented that her mother had to give her Times St. house to Senator Noynoy Aquino because he was the only one who does not own a house. Kris joked her brother that she'd want to live in the house, too.

"For a while in the hospital I was telling Noy, 'Don't you want me to live you?'" she recalled. "Sabi niya, 'Ano, magiging Mama Kris kita kagaya nina Josh?' Sabi niya, 'Maawa ka naman sa akin!'"

SAYING SORRY. Kris also remembered how her mother naturally forgave her when she apologized for past disappointments.

"Her reply to me, Jessica, was, 'There's no need say sorry, Kris. Of all my kids, you've brought me the most joy'. Nasabi niya sa akin na she was very very proud of me, and she really would always say na, 'Ikaw na ikaw ang daddy mo,'" Kris said.

She continued, "I know that there were many instances that I disappointed her, but Jessica, you know, she loved me enough to let me become a good person."

Can she live up to her mother's ideals?

"Living up to her and to what she and my dad did, mahirap, Jessica, parang imposible," Kris admitted.

INSTRUMENT OF PEACE. Kris also recalled how she became the bridge for her mother to make peace with past adversaries. When Kris did a commercial for San Miguel Corp., for instance, Cory decided to make amends with her cousin Eduardo "Danding" Cojuangco, chairman and CEO of the multinational company.

"Matagal yung hidwaan between her and my uncle Danding Cojuangco," Kris explained. "But when San Miguel gave me a commercial, in my mom's mind, it was peace. She said, 'At least, the fact na kinuha ka nila, siguro everything is behind us.'"

Pablo Salomon Martinez, the primary suspect in the killing of Ninoy on August 21, 1983, had accused Danding, a Marcos crony, of masterminding the assassination plot.

Similarly, a rift due to political reasons exists between Cory and Tessie Aquino-Oreta, Ninoy's sister. Kris also announced that this gap had already been mended.

"When Tita Tessie Oreta wanted to visit her in the hospital... Ako yung tinanong if it was okay. Because she had dreamt na dad said, puntahan mo si Cory at dalhan mo siya ng stargazers, and she went, and I also think yun yung closure," Kris said.