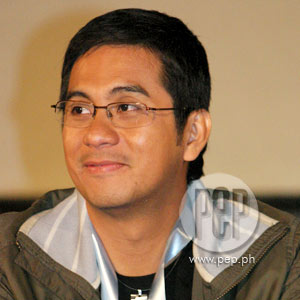 "I worked with her in Kay Tagal Kang Hinintay, she was only 14. May mga pinagagawa na 'ko sa kanya na beyond her age... And then her first feature film Now That I Have You, ako rin ang may hawak," says director Laurenti Dyogi about Bea Alonzo. The two have worked together on so many projects in the past, like the hit ABS-CBN soap Kay Tagal Kang Hinintay, and Bea's first full-length feature &lt

The people behind And I Love You So were very happy last night, August 5, as they talked about their new Star Cinema movie. Director Laurenti M. Dyogi with the cast—composed of Bea Alonzo, Sam Milby, Derek Ramsey, Coney Reyes, Candy Pangilinan, and Nikki Gil—were even joking around comfortably as they tackled questions from the press.

At one point, Direk Lauren described how each of his actors were in the set. He revealed, for instance, that Sam is the most "antukin" of the cast members.

Direk Lauren added that he "expected the worst" from the former Pinoy Pig Brother housemate, but he was pleasantly surprised.

DEREK AND CONEY. The PBB 'kuya' then made Derek smile when he described the actor as a "natural charmer." The director also admitted that there were times when he instructed difficult blocking instructions to Derek, who injured his knee in a frisbee competition, just to give him a hard time.

Coney's food, meanwhile, was the said reason why they extended the shoot. The director joked that they can't get enough of the edible treats Coney brings to the set everyday.

NIKKI AND CANDY. Direk Dyogi kidded that Nikki's inclusion to the cast insured that they can now feature the movie in high-class malls.

Direk Dyogi added that the actress and TV host did not want to do the movie at first, but finally conceded to give the movie some "class."

Direk Dyogi also joked that one of his fears was that the movie can't be shown in Baguio because of Candy, who was banned two months ago from entering the city because of a joke she made. (Click HERE to read related story)

He was happy, therefore, when the ban was lifted. The comedienne was even included in the committee that will oversee Baguio City's centennial celebration starting this September.

ON BEA. The kapamilya director, however, was serious when she talked about Bea, whom he claimed as the most important actress in his life and career.

"I worked with her in Kay Tagal Kang Hinintay, she was only 14. May mga pinagagawa na 'ko sa kanya na beyond her age... And then her first feature film Now That I Have You, ako rin ang may hawak," he explained.

Direk Dyogi added that it had always been a pleasant experience working with Bea.

"What I like about her is yung attitude niya, yung willingness to learn... We're always giving her roles na beyond her... Mahirap yung pinagdadaanan niya, pero I'm very happy na she's able to [conquer] the challenges," Direk Dyogi concluded.

And I Love You So will have a premiere night on August 11 in Trinoma Mall, Quezon City. It's regular run will start the day after, August 12.