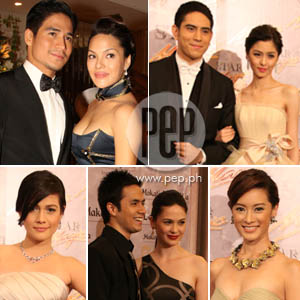 Photographers lined the red carpet as dozens of celebrities wearing formal gowns and suits paraded before them. Continuing a grand tradition that started three years ago, ABS-CBN once again organized a Star Magic Ball to mark the 17th anniversary of its talent management and development arm.

Last night, August 30, PEP (Philippine Entertainment Portal) witnessed how the Rizal Ballroom of Shangri-La Makati was filled to capacity with the homegrown talents of ABS-CBN being handled by Star Magic.

"Congratulations to Mr. M [Johnny Manahan, who heads Star Magic]," said Ms. Charo Santos-Concio, President of ABS-CBN in her speech that night. "Tonight, we celebrate 17 years of great talent management and development. This is a night of class, glamour, and romance."

Wine glasses were offered to the celebrities as they reached the end of the red carpet. Photographers kept snapping their photos as the stars made their way up the grand staircase leading to the Rizal Ballroom. There were photo booths set up in the lobby of the Rizal Ballroom where stars could have their candid photos taken while waiting for the program to start. The venue was decorated with photos of marble statues reminiscent of classical Greek sculpture.

By 9:45 pm, event hosts Piolo Pascual, Bea Alonzo, and John Lloyd Cruz started giving away the coveted trophies to the stars whose fashion styles were exceptional that night.

There were two pairs named as Couples of the Night: Lovers in Paris love team partners Piolo Pascual and KC Concepcion, as well as Tayong Dalawa's Kim Chiu and Gerald Anderson. Kim thanked Paul Cabral for designing her gown; Gerald expressed gratitude to Inno Sotto for his suit.

"Thank you everyone for welcoming me to the ball," said KC, who attended a Star Magic Ball for the first time this year. This also marks the first time that Piolo brought a date to the formal event. (Last year, he arrived at the 2nd Star Magic Ball with his mother.) KC wore a navy blue dress and she pointed out that this color was Piolo's favorite shade.

Prior to the program, PEP had the chance to talk with Piolo and KC and they admitted that they have code names for each other. "Paano n'yo alam yun?" exclaimed KC. The press directly asked Piolo if he is "Peter Pan" in the life of KC and he said yes. Piolo (whose initials are the same as Peter Pan) said that he refers to KC as Tink (short for Tinkerbell) but she prefers to be called Wendy.

Hailed as the Most Stylish Star of the Night was John Lloyd Cruz. When asked to define style, he answered, "It's an expression of who you are... your inspirations, your creativity and your personality."

The next trophy, the Most Elegant Award, was given to Bea Alonzo "for standing out due to pure sophistication."

Anne Curtis was chosen as the Most Glamorous person that night. Her black vintage '50s-inspired gown was made by Dubai-based designer Michael Cinco. While onstage, she told her escort that night, "Sam [Milby], you look dashing tonight."

Billy Crawford and Nikki Gil were named the Classic Chic Pair while Zanjoe Marudo and Mariel Rodriguez were the Classic Chic Couple. The Best Dressed Couple that night was Maja Salvador and Rayver Cruz.

"For willing to take a risk by being edgy but not scary," Yeng Constantino was honored with the Fashion Forward Award. Her black and gold gown had a woven pattern and showed off her left leg with a high slit.

DANCE, DANCE, DANCE. As soon as the program ended, stars and executives took to the dance floor and didn't stop until the wee hours. Mr. Manahan kept up as he danced enthusiastically with the young stars. Gretchen Barretto danced ballroom with former ABS-CBN President Freddie Garcia.

Chokoleit paraded around the red carpet and the dance floor with a standee (lifesize cardboard cutout) of Pokwang. The comedienne was not able to attend that night but her photo was one of the most photographed subjects that night.

Among the couples spotted that night were Claudine Barretto and husband Raymart Santiago, Rica Peralejo and fiancé Joseph Bonifacio, John Estrada and fiancée Priscilla Meirelles. Real-life couples Angelica Panganiban and Derek Ramsey, Diether Ocampo and Rima Ostwani, as well as Mariel Roriguez and Zanjoe Marudo who hardly separated from each other that night.

Luis Manzano attended the event without girlfriend Angel Locsin. The two are said to have had relationship problems recently. When PEP asked him if he invited Angel to the Star Magic Ball, he said that he did invite her but she was unavailable that night.

For the first time, Gretchen was able to attend a Star Magic Ball and she talked about an upcoming teleserye with her sister Claudine. Later that night, Gretchen was seated together with Pops Fernandez; Ruffa Gutierrez dropped by their table to say hello. Ruffa was accompanied by her brother Raymond Gutierrez, one of the hosts of GMA-7's talk show Showbiz Central.

Another first-timer at the Star Magic Ball was Maricar Reyes, who refused to talk about Hayden Kho and the issues surrounding his sex-video scandal.

Kristine Hermosa and Oyo Sotto walked the red carpet while holding hands, causing a flurry of excitement among photographers. Later on, Kristine separated from her date to grant a photo op with her ex-boyfriend Jericho Rosales.

Another ex-couple, Sam Milby and Anne Curtis, also arrived at the event together, fueling speculations that they might have gotten back together.

Rafael Rosell showed up with his date, Aze Sasaki, who was FHM's Girlfriend of the Year in 2004. The two clarified that they are just friends.


Click HERE to view photos of stars as they walked the red carpet. To join SyleBible's poll, click HERE.