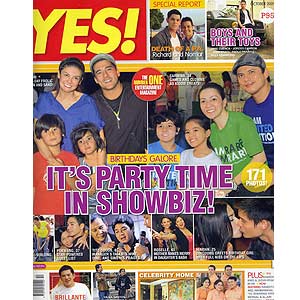 One of the persons in Philippine showbiz who died in the most heartbreaking accidents in history involves not a big-name celebrity but a well-loved personal assistant (PA).

The October 2009 issue of YES! magazine, the number one entertainment magazine in the country, gives tribute to the late Nomar Pardo, the PA of actor Richard Gutierrez, who died in a car accident last May 22 when the sports car being driven by the actor crashed along Santa Rosa-Tagaytay Road in Silang, Cavite.

The magazine carries a 14-page special report detailing the events leading to the accident, and its tragic aftermath. It contains exclusive interviews with the late PA's family and friends, exclusive photos, and news updates on the Reckless Imprudence Resulting in Homicide case filed against Richard.

Pictures of Nomar Pardo's family depict Nomar as a dedicated husband to wife Lorayne, and a good father to his young boys, three-year-old Kiel and five-year-old King.

In the article, Lorayne admits that her two sons still pine for their deceased father.

Nomar's half-brothers Isa Kris and Faisal said Nomar was "cool, jolly and very nice to us... he was always there for us."

PARTY ALL THE TIME. This issue of YES! magazine also features exclusive photos of the hippiest celebrity parties over the last few months. See stars Iza Calzado working hard for Gawad Kalinga during her 27th birthday, Carmina Villaroel sharing her blessings with children from Philippine Orthopedic Center during her 34th birthday, and Aga Muhlach and family bringing all their friends to CamSur for a four-day party to celebrate his 40th.

The talents of the late talent manager Douglas Quijano pull off a tearful commemorative party for their mentor and close friend. Regal Films executive Roselle Monteverde-Teo dances her way to her 45th birthday, a very happy Pokwang cries because of a "special person" during her birthday party, and Marian Rivera kisses rumored boyfriend Dingdong Dantes during her star-studded birthday bash.