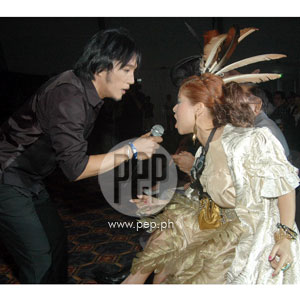 Arnel Pineda hands the microphone to Tessa Prieto-Valdes during his performance at the awarding ceremony of 11th Cinemanila International Film Festival. The event was held last Friday, October 23, at the NBC Tent in Taguig City.

While Akon was conducting his concert at the Araneta Coliseum last Friday, October 23, Arnel Pineda was holding his own mini-concert at the NBC Tent in Taguig City.

The Filipino vocalist of American band Journey wowed the guests at the awarding ceremony of the 11th Cinemanila International Film Festival. Arnel ran across the stage and gave energetic renditions of "It's My Life," "We are the Champion," and "Sweet Child of Mine."

Guests—who were mostly dressed in formal wear or barong Tagalog—enthusiastically clapped and sang along with Arnel. During his performance, Arnel handed the microphone to Tessa Prieto Valdes and Taguig Mayor Freddie Tinga—both of whom did not pass up the chance to sing along with the world-renowned singer.

Joel Torre, Luis Alandy, Mon Confiado and Ynez Veneracion were among the celebrities who attended the awarding ceremony that night. Ronnie Lazaro was also present as a member of the jury that selected the winners of this year's Digital Lokal winners. Renowned director Brillante Mendoza (Serbis, Kinatay, Lola) served as the international competition chairperson. Some of the presenters that night were Ketchup Eusebio, Anacbanua star Che Ramos, and Ana Capri. Albert Martinez and Giselle Sanchez served as the evening's hosts.

Arnel's appearance at the awarding ceremony served as a fitting ending to Cinemanila that will conclude today, October 25, with the closing film Himpapawid. For the past ten days, 80 films from 30 countries were screened in the cinemas of Market! Market!

"From Pusan to Rotterdam, Berlin to Cannes, filmmakers like Brillante Mendoza, Lav Diaz, and John Torres brought honor in the country, and this has never happened before," he observed.

According to him, Philippine cinema is being kept alive by stories being told, and films being created by both established and blossoming filmmakers.

LIFETIME ACHIEVEMENT AWARDEE. The Cinemanila Lifetime Achievement award was presented to Paul Schrader, screenwriter of such films as Taxi Driver and Raging Bull. In his speech, Schrader explained that the history of motion pictures is undergoing extraordinary change.

"It is now so easy to make movies, economically, with digital filmmaking, and editing through a laptop. What we see is a blossoming of individual films that were being inhibited by the commercial system during the last hundred years," said Schrader. His latest film, Adam Resurrected, was screened last week right after he gave his master class on scriptwriting.

Cinemanila honored Schrader for his "masterful storytelling and for his body of work, which is an unapologetic reflection of the human soul and psyche."

In his speech, Lav hailed fellow artists whom he referred to as "mapagpalayang alagad ng sining."

When PEP (Philippine Entertainment Portal) talked with Direk Lav before the awarding ceremony, he pointed out that his films examine the plight and culture of Filipinos and society. He deliberately does not follow trends set by Western cultures and neither is he limited by the norms of commercialism.

Here are the winners at the 2009 Cinemanila International Film Festival:

The Lino Grand Jury Prize was bagged by Biyaheng Lupa by first-time director Bing Lao. His film tells the story of individual passengers as they journey to the southeastern side of the country aboard a bus.

Anacbanua (The Child of the Sun), considered to be the first digital feature film in the Pangasinan language, bagged two awards: Lino Grand Prize award and Best Director award. This Christopher Gozum film is a non-linear film about a poet's return to his homeland in Pangasinan.

The Cebuano film To Siomai Love, which also bagged two prizes that night, shows a man's attempts to get over his aching heart. Its director, Remton Siega Zuasola, also received the Ishmael Bernal Award for Most Outstanding Young Film Maker, a recognition he shares with past recipients Raya Martin and John Torres.