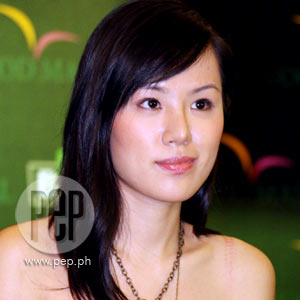 Model-turned-actress Joyce So is excited over her upcoming project under ABS-CBN where she will act alongside Judy Ann Santos. "Sobrang love ko siya!" Joyce eagerly said about Judy Ann in a recent conversation with PEP (Philippine Entertainment Portal).

2006 Mossimo Bikini Summit winner Joyce So can't believe her good fortune on being selected by ABS-CBN to be part of Judy Ann Santos' upcoming primetime series, Habang May Buhay.

Touted as the "first-nurse serye on Philippine television," Habang May Buhay is reportedly slated for launching early next year under the direction of Wenn Deramas, Jerry Lopez Sineneng and Mark Meily.

At the launching of The Bar's newest apple flavor vodka held recently at Eastwood Mall in Libis, Quezon City, Joyce excitedly told PEP (Philippine Entertainment Portal) about her role and feeling dumbstruck in the presence of her more established co-actors.

But Joyce's greatest star-struck experience is reserved for the lead star, Judy Ann Santos or Juday.

"Nakaka-intimidate at first pero after I got through that initial feeling, nakita ko talaga na sobrang bait niya and sobrang down-to-earth niya," she praised Juday, and then beamed, "Sobrang love ko siya!"

ONE STEP FORWARD. While Joyce feels honored to star in a primetime series bannered by a huge star, the sexy neophyte tries her best not to be overwhelmed by her latest career development. On the other hand, she'd rather not feel complacent, to avoid disappointment should expectations fell short in the end.

Actually, Joyce is not entirely a novice in the field, having done a few modeling gigs and television guestings in between. Since bagging the Mossimo bikini tilt three years ago, Joyce admitted getting used to the erratic work schedules, along with losing her privacy in showbiz.