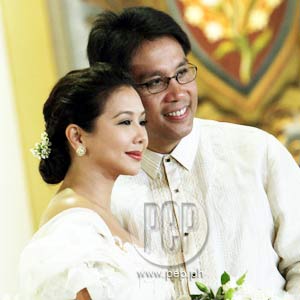 Veteran broadcaster Korina Sanchez and Senator Mar Roxas became an item in 2004. They finally tied the knot five years later on what could be called the "Wedding of the Year."

Gone was the weary, serious look of Sen. Mar Roxas, 52, yesterday, October 27, when he and TV journalist Korina Sanchez, 45, made their wedding vows at the Sto. Domingo Church in Quezon City.

Political leaders,—allies and rivals alike—showbiz personalities, and business tycoons joined other exclusive guests of the couple to bear witness to what probably could be called the "Wedding of the Year."

They were only a handful out of nearly 3,000 guests inside the church; not to mention the 2,000-plus supporters who put up with the searing heat just to be present.

It was a Filipiniana-inspired wedding. The gentlemen's intricate barong Tagalog was designed by Randy Ortiz; the ladies wore Maria Clara-inspired ternos. Even the flowers were all 100-percent Filipino. —rosal, sampaguita, and camellia decorated the wedding and reception tables.

LATE FOR GOOD REASON. Korina was 45 minutes late for the wedding scheduled 2:30 p.m. But as it turned out, she visited the graves of her dearly beloved parents, Ramon and Celia Sanchez, who both died in 2004, at Heritage Park in Taguig City to pay her respects before her wedding.

Arriving past 3 p.m. and despite the heat, Korina still looked beautiful and her Pepito Albert-designed serpentine-style gown in Filipiniana motif made her look more regal. Arriving at the steps of the Sto. Domingo Church, Korina was finally moments away from being Mrs. Roxas. Escorted by her brothers, Korina walked to the altar and was then greeted by Mar's son, Paolo (who was also his best man), and finally by Mar himself who gave his future wife a hearty salute.

The groom looked extremely happy and very much in love, kissing Korina's hand and forehead from time to time.

NO FANCY RECEPTION. If they had pushed through with the originally-planned reception at the Araneta Coliseum, they would have spent about three million pesos. But with the Ondoy and Pepeng victims in mind, they decided to donate the amount and went for the simple, intimate reception with family and close friends at Bahay na Puti, the ancestral home of the Roxases in Cubao, Quezon City.

The reception itself was very Filipino, tables laden with locally-grown flowers and with added details like gasera (virinas) lamps and Pampanga-specialized Venetian mirrors. Heny Sison made the callado-designed wedding cake.

TWO-PART HONEYMOON. It has been reported that Mar would take his wife for a couple of days on a honeymoon in Japan. The Senator told reporters that the second part would be a longer trip to Europe.

"We plan to have another one in December, in Italy, coinciding with the Christmas break," he said.