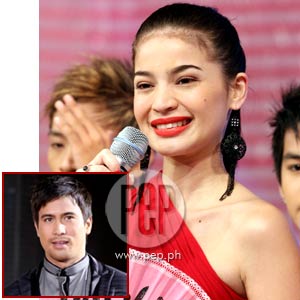 "I think it's safe to say na we're not rushing into anything siguro, which is advice din naman ng lahat ng tao," said Anne Curtis about her reconciliation with former boyfriend Sam Milby.

Anne Curtis confirmed a previous statement of her former boyfriend Sam Milby that they're going out again a year after they ended their relationship. (CLICK HERE to read related article)

"Hindi naman namin dine-deny na we get to hang out again," said Anne to the media after the set visit on her newest TV program called Showtime this morning at ABS-CBN compound in Quezon City.

If the former couple almost lost contact after the breakup, now it's different. Anne said she has learned to accept the things that happened between her and Sam.

GETTING BACK TOGETHER? Now that they've renewed their friendship, will this also lead to a second time around?

She also stressed, "I think it's safe to say na we're not rushing into anything siguro, which is advice din naman ng lahat ng tao."

The former Dyosa star was honest enough to say that her breakup with Sam could be the hardest that she had. But it taught her a lesson about relationships.

LOVE FOR SAM. Although Anne has already moved on with her life after her romantic relationship with Sam, she said that her love for the Pop Icon would never fade.

Lastly, she reiterated, "I guess it's safe to say na, of course, the love is there. Parang just the same love I have for sinaunang Oyo pa is there. Pero hindi na siya yung kailangan nasa life ko siya. Kaya ko naman kahit wala."