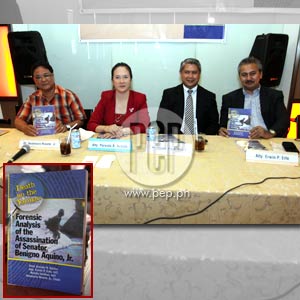 This was the statement of Atty. Percida Acosta, chief of the Public Attorney's Office (PAO), during the book launch of Death on the Tarmac: Forensic Analysis of the Assassination of Senator Benigno Aquino, Jr., last October 27 in Cravings Restaurant, T. Morato Ave., Quezon City.

The murder of the former opposition lawmaker on August 21, 1983 sparked the "People Power" revolution that ousted then President Ferdinand Marcos. And while the Aquino-Galman double murder case had already been resolved by the courts in 1985, many Filipinos still believe that the verdict—that those guilty of the crime were the 25 military personnel who served as Aquino's bodyguards on the plane—shies away from the truth.

Atty. Acosta and Dante "Klink" Ang II, president of The Manila Times, sat in the panel.

Also present were Fr. Robert Reyes, a Catholic priest known for his social and political activism, and the convicted soldiers who were recently granted executive clemency.

Published by The Manila Times, the book concludes that Rolando Galman, who was shot to death by airport personnel immediately after Ninoy's death, was the real culprit. The forensic investigators used techniques, like the study of bullet trajectory and the murder weapon, to reach their own verdict.

The Marcos government first claimed that "Communist hitman" Rolando Galman shot Aquino. But on October 23, 1984, a fact-finding commission concluded after studying 20,000 pages of testimony taken from 193 witnesses that the assassination was a conspiracy of the military.

Several generals and colonels, the 25 military personnel, and one civilian were later charged for the murder of Senator Aquino. But after a brief trial, the Sandiganbayan acquitted all the accused on December 2, 1985.

When Marcos was ousted in 1986, the military personnel were again charged with the same crime.They were later found guilty and were sentenced to life imprisonment at National Bilibid Prison. Some of the convicted soldiers died during incarceration; the others were granted conditional pardon by President Gloria Macapagal-Arroyo last March.

Two years ago, former Air Force Master Sergeant Pablo Martinez, one of the convicted soldiers, was first granted the pardon by Arroyo for "humanitarian reasons." Martinez was 70 years old.

Members of the Aquino family slammed the release of Martinez from prison. Sen. Noynoy Aquino, now a presidential aspirant, said the pardon might be "politically-motivated," since his mother, former President Cory Aquino, was asking for Arroyo's resignation.

CONTROVERSIAL. According to the authors of the book, the aim of the investigation was to find out who really pulled the trigger. Atty. Acosta said she asked the forensic analysts to conduct the investigation so that the court case can be opened.

"I asked these forensic experts to make a study, which later on became instrumental in the reopening of the Aquino-Galman case. That study, which lasted for about three months of almost sleepless nights, metamorphosed into a book," she said.

The chief public attorney added that another investigation should prove the "innocence" of the convicted solders. Even if they were already granted pardon, they are still tagged as criminals, she added.

The lawyer also challenged Sen. Aquino to include in his platform for government the reinvestigation of the killing, noting that the Aquino family always protests any move to open the already resolved case.

For his part, Ang explained that The Manila Times published the book because of their commitment "to the pursuit of truth." Last October 29, Ang's newspaper published an editorial that disagreed with the findings presented by the forensic investigators. The newspaper's primary aim, it said, was "to provoke a debate, or at least a new round of discussions."

"We hope also that the book would trigger the reopening of a new and more thorough investigation and search for leads to the mastermind," the editorial added.

Death on the Tarmac: Forensic Analysis of the Assassination of Senator Benigno Aquino, Jr., priced at P250, is now available in all major bookstores nationwide.