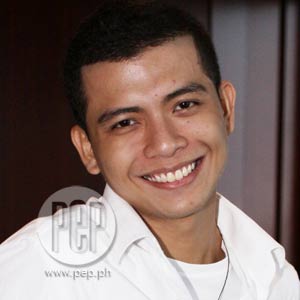 Star Magic talent Pica Lozano, who learned hair styling from his father, said he cuts the hair of his co-talents "just for fun" and for extra cash. "In ABS-CBN, I cut the hair of Josef Elizalde, Dino Imperial, Chris Gutierrez. They're my good friends kasi," he said.

When it's said newcomer Pica Lozano brims with talent, that's no exaggeration. This 20-year-old Star Magic artist, launched more than a year ago, knows how to act, sing, dance, host, draw, and make documentaries.

But the talent that stands out uniquely is his skill in hair styling.

"Believe it or not, I'm a hair stylist. I also cut hair," he told PEP (Philippine Entertainment Portal) during the presscon for Star Magic's September-October birthday celebrators last October 29.

According to Pica, he learned hair styling from his father, a famous hair stylist in Manila known professionally as "Python." And he got his performing talent from his mother, who works as a hotel manager.

"I got this interest from my dad. My dad is a professional stylist. One of Manila's finest siya. He's known as a Python," Pica said. "My mom is a hotel manager. She's more of a paperwork type of person. My communication talents from my mom, my artist talents from my dad."

While may be peculiar for a tall, athletic young man to do hair styling, Pica says he uses the talent to earn money. His co-talents from ABS-CBN are his customers.

"Before it used to be just for fun, and then eventually it became a profitable hobby... In ABS-CBN I cut the hair of Josef Elizalde, Dino Imperial, Chris Gutierrez. They're my good friends kasi. And some of the staff," he narrated.

STUDY CAME FIRST. Pica said he could have been launched by Star Magic earlier had his father not barred him from showbiz until he finished high school.

"I was prohibited by my dad, because it was more of an educational matter, na makatapos muna ako nung high school at least before I step into showbiz," he said.

Pica was discovered four years ago when he attended acting workshops in ABS-CBN. Afterwards, he was introduced to Mr. M [Johnny Manahan], the head of Star Magic.

When Mr. M said he could be an actor, Pica's father disagreed. Pica was only 15 years old back then, and he was still studying in a Catholic high school in Las Piñas.

He was only permitted to enter showbiz after finishing one year of college in San Beda. Pica has stopped studies for now, and resolves to return to it later.

"Supposedly, I would've finished na my college if I wasn't in here. But I'll get back to it," he said.

"Currently I only appear in ASAP '09, and a few guestings in Wowowee. Mostly, the choreography, the hairstyling, are projects outside ABS-CBN," Pica said.