Sarah Geronimo's Record Breaker concert lives up to its name 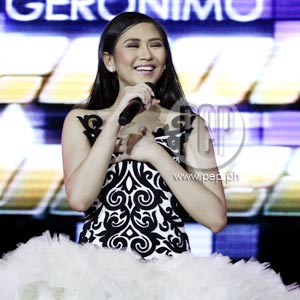 For Sarah Geronimo, there's no place like home. Proving anew her status as a certified crowd-drawer, the young singer performed her fourth concert Record Breaker before a jampacked crowd last night, November 7, at the Araneta Coliseum in Cubao, Quezon City.

Sarah endearingly calls the Big Dome "home"—a claim she can rightfully make as all of her major concerts since 2005 have been done at the historical indoor sports stadium.

Each year has seen a notable increase in audience size and last night's concert perhaps drew the biggest gate attendance of all of Sarah's major concerts.

Much, of course, has changed since Sarah's solo concert last year. Aside from the platinum selling records, the former Star of the Night big winner is now also a certified box office actress, as proven by the strong showing of her two romantic-comedy films opposite John Lloyd Cruz: A Very Special Love (2008) and You Changed My Life (2009).

REINVENTING SARAH. Now a blooming young lady at 21, the Pop Princess has chosen the right path—concerts like Record Breaker—to gradually distance herself from the cute teenybopper image she had nurtured since her first foray into the spotlight as a shy but determined 14-year-old.

Sarah opened the evening with the energy-driven dance number "Unstoppable" before changing gears to "Love Game."

Sarah's repertoire that evening meandered from dance to pop cover tunes. Her beautiful rendition of Beyonce Knowles' "Broken-Hearted Girl" was one of the most appreciated. But eager crowd reaction was reserved for her early hits, like "Sa Iyo" (given an R&B arrangement that evening) and "Dahil Minahal Mo Ako."

ASAP '09 and Champions colleague Christian Bautista appeared as Sarah's first guest. Christian performed a medley of hits originally popularized by balladeer and prolific songwriter Jose Mari Chan. Next, Sarah and Christian performed a duet of "Please Be Careful With My Heart." Incidentally, Asia's Songbird Regine Velasquez, who originally recorded the song with Jose Mari years ago, was in the audience that night.

Viva Records' new all-girl group, Pop Girls, joined Sarah in singing the infectious South Korean pop hit, "Nobody." Speaking of going international, Filipino-British Charlie Green of Britain's Got Talent performed "The Way You Looked Tonight" with his "Ate Sarah." As a new addition to Viva Records' growing list of young talents, Charlie brandished those extraordinary pipes fit for standard tunes through the songs "For Once in My Life," followed by the classic Filipino ballad, "Dahil Sa Iyo."

Sarah paid tribute to the legacy left by the King of Pop, Michael Jackson, by interpreting "One Day In My Life," "Ben," "I'll Be There," and the defiant "They Don't Care About Us."

Billy Crawford, Vhong Navarro and Luis Manzano teamed up with Sarah in dishing out the music of the popular American '90s boy band, Backstreet Boys.

REACHING NEW HEIGHTS. Sarah became very emotional while talking about her struggles when she was still a beginner trying to make it big in the industry inundated by talents and aspiring singers.

Though she has gradually moved away from the old signature hits that made her a household name, Sarah knew by heart the importance of the songs that propelled her to the top and the expectations of the fans to hear them. A medley of the songs "Forever's Not Enough," "How Could You Say You Love Me," and her winning piece, which was a cover of Celine Dion's "To Love You More," brought back memories of the old Sarah.

One of the evening's highlights was Sarah performing the theme songs of her two hit movies, "A Very Special Love" and "You Changed My Life," complete with film scenes playing on the background wall screen.

And just like in previous years during her concerts, the audience, most notably loyal supporters, were hoping for some major announcement from their idol regarding the true status of her romantic life.

Nothing earthshaking came as Sarah maintained that she remains single and unattached. However, it didn't mean she wasn't looking and hopeful. After singing the last line of the yearning ballad "Right Here Waiting," Sarah—with the strain of the poignantly familiar notes of the song still ringing from the coliseum speakers—beamingly announced: "Kung sino ka man, dumating ka na!"

The Pop Princess has grown up, indeed, in more ways than one.