New Hollywood actresses to do movie in the Philippines 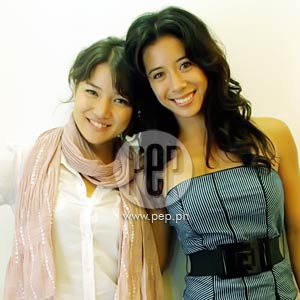 Last week, two upcoming Asian actresses who work in Hollywood visited the Philippines to supervise the shoot of the teaser of a new movie they are producing together. Best friends Emily Kaiho and Tara Macken, who both work in stunt-filled roles, said they chose to highlight our tropical country because it's a "center of talent."

"I know there a lot of talented people in the Philippines... amazingly talented people. And why don't we shoot it somewhere interesting?" said Filipino-Irish Tara to PEP (Philippine Entertainment Portal) during their visit to the Summit Media office recently.

Japanese-American Emily, who worked with Josh Hartnett in the forthcoming action film Bunraku, added that they want to tap the talents of Filipinos. Their director, for instance, is actor-director Pedro "Joaqui" Valdes, whose short film Bulong won the Golden Duck award for Best Short Narrative at the 2nd New Beijing International Movie Week last year.

Their cast will include MTV VJ Cesca Litton and Isabella Gonzales (daughter of Kuh Ledesma). Since the movie will be action-packed, they also signed up the help of traceurs, or practitioners of parkour, here in the country.

Parkour is the "art of displacement," or an activity where practitioners try to navigate and overcome obstacles like walls and roofs by using precise movements such as climbing, running, and jumping.

Emily said they used YouTube to find traceurs here in the Philippines.

"We looked at all the videos, and we found the best video. And it's called Philippine Freelancers. They have a contact information, so we emailed them. He came back to us. So we've been e-mailing each other for like two months. Through email, we got him to work on our project for no charge," she said.

DREAM OZ. The movie they're planning to shoot in the Philippines will be based on the classic children's tale by L. Frank Baum.

"It's a twisted version of The Wizard of Oz. Action-thriller movie," said Tara, adding that she got the idea of the movie through a dream.

Emily added, "But actually her dream, it was like an action movie. It was like a superhero movie. I'm like, 'Wow! That's so cool! It's a very unique dream, so let's think about the details and just write them down as a script.'"

Tara added that the producers they know told them the script was good, so they are now working on pitching the movie to production companies in Hollywood. And to be able to make a successful pitch, they flew to the Philippines to shoot a good video teaser.

"The Philippines has this amazing location that's so unique, it doesn't look anything like Los Angeles. That's how we thought in the beginning of how to shoot a teaser here," she said.

One of the locations they chose to include in the movie is Chinatown, located in Binondo, Manila. They shot the teaser last Saturday, and flew back to Los Angeles the following Monday. If the finished teaser gets noticed in Hollywood, they will come back to the Philippines to finish the film.

In the movie, Tara and Emily will play sisters, who are very different. Tara is the popular girl, while Emily is the shy girl whose name "nobody knows about." Things will change, however, when a new technological craze comes on campus.

"There's like this Oz connector. It takes you to like a virtual world, like a 3-D world. In this world you can be in this video game, it's like that. So they get hooked onto it, it's like the new drug. The movie's dark and kinda creepy, but there's more fantasy," Emily said.

ASIANS IN HOLLYWOOD. According to Tara, who was born in Kuwait but grew up in the Philippines, Asia is not that "major' in Hollywood yet.

"Nobody knows about... well, not that nobody knows about the Philippines, but it's not major yet. And it can't be like that because there's so much talent here," she said.

Emily, who was raised in Japan, added that Asian actors get a hard time looking for roles because of their nationality.

But in Tara's case, Filipino blood proved to be more of an advantage.

"Filipinos look like any nationality on the planet. When I go out with my Filipino friends, Americans go like, 'Okay, you're Japanese, you're Chinese... you're European-Mexican," she said.

Even so, Tara admitted that her double identity also caused hardship.

If that's the case, is she willing to settle in the Philippines for good to continue her acting career?

Emily agreed with her training partner turned soulmate. "Not definitely, but if it comes along," she said.