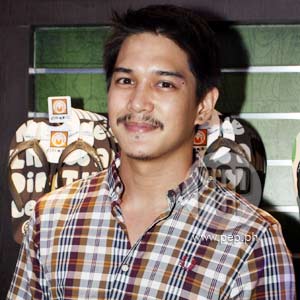 Luis Alandy is picking up the pieces following the devastation of typhoon Ondoy last September. The indie actor lives in the same Pasig subdivision where Carmina Villarroel and family are staying.

Actor Luis Alandy was supposed to join the cast of GMA-7's early primetime series Ikaw Sana, starring Mark Herras and Jennylyn Mercado, but had to decline for urgent personal reasons.

Like most of our countrymen, Luis experienced the wrath of typhoon Ondoy last September, which left his house in Pasig submerged under water. The flood remained for weeks, he recalled, even after the storm had left the country, .

"Nawala 'yong [flood] water like a week and a half ago lang," Luis told PEP (Philippine Entertainment Portal) in a recent interview held at the official launching of Ocean Minded footwear at the 4th level of SM Mega Atrium, SM Megamall in Mandaluyong City.

Though shaken at first, the actor is now gradually recovering from the calamity. During the flood, Luis stayed temporarily in his parents' house in Taytay, Rizal. But he has no plans of leaving or selling his house to move to another area considered flood-free.

PROMOTING HIS ROOTS. Although Luis opted to let go of Ikaw Sana, the 29-year-old actor will be seen in the period film Buenavista (Ang Kasaysayan ng Lucena) alongside veteran actors Eddie Garcia and Ricky Davao.

The independent film project revisits the time when our country was still under Spanish and American rule. Luis portrays the character of Horacio Zaldena, a radical thinker who hopes to overthrow the oppressive foreign rulers through peaceful means.

A true story, Buenavista focuses on the province of Quezon and the struggles and aspirations of the Filipinos to achieve independence. One of the reasons Luis accepted the project was because its geographical location, like Tayabas and Lucena, is essential to the plot, .

Luis hopes that Buenavista would expose the beauty of Quezon to the viewing public, the way it did for him while completing the movie project.


(CLICK HERE to learn more about the indie film Buenavista)