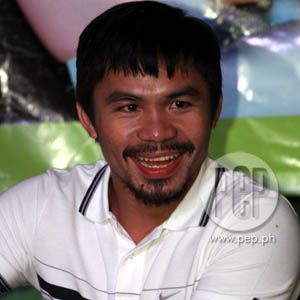 Filipino boxing icon Manny Pacquiao proves himself once more as an unstoppable fighter, bringing glory to the country with his historic win over slugger Miguel Cotto and grabbing the Puerto Rican's Welterweight title.

And took it away he did with systematic and timed punches, while with his speed easily dodging the more powerful yet slower opponent, before bringing in the final punishment in the 12th round with his signature left stinger that made the Puerto Rican unable to continue fighting for his title.

Referee Kenny Bayless stopped the bout in the 12th round when he noticed that Cotto was no longer fighting.

Such a feat has been attained at no small price and to capture this new glory meant that Manny had to go out of his comfort zone and pay for it literally in blood, sweat, and tears.

BLOW-BY-BLOW ACCOUNT. The fight, dubbed "Firepower," is still minutes away but the two fighters look pumped and ready to unleash hell on each other. After the introductions and the loud cheers from the whole MGM Grand, the game is finally on.

Cotto initiates by giving Manny a jab and the two give each other jabs but to no effect. Defenses up, the two size each other up for a moment before Manny gives a combination of punches. Cotto evades but Manny once again unleashes a flurry of punches, connecting Cotto in the body. Elbows clash but referee Kenny Bayless separates the two fighters.

Cotto goes for Manny's body but is unsuccessful. Manny strikes back with a hard left but Cotto skillfully evades as well. The round ends.

The second round starts with a jab by Manny but Cotto evades. Weaving left and right, Cotto locks on to Manny with a straight right, but fails. Manny keeps his distance but goes for a straight left to Cotto's side. The two exchange combinations and the crowd goes wild!

Manny gets a solid left from Cotto but he backs up and recovers. The aggressive Cotto continues to give Manny a combination of two in the body and one in the head. Manny seems to slow down a little but quickly surprises Cotto with speed punches and connects.

Third round commences with Manny jabbing Cotto with his right. Manny combines with a right hook to the left side of Cotto's face, which makes the Puerto Rican kneel. Cotto retaliates with jabs and combinations to Manny's body but Manny doesn't look affected. A quick head butt by Cotto doesn't slow down Manny either. Manny goes hard for Cotto by giving him an uppercut to the chest and Cotto slams back by unleashing a left hook to Manny that barely misses.

The fourth round sees Cotto's defenses up and Manny gives two rights with no success. Manny then gives Cotto a body beating and the Puerto Rican retaliates. Manny rains down hard with combinations and Cotto fights back and pushes Manny to the ropes of the ring. Manny breaks away with a right and after a skillful evasion, gives a two-punch combination and gives a left uppercut to Cotto, bringing him to a daze. Before Manny can get into momentum, however, the bell sounds, saving Cotto.

The fifth round starts with Manny giving sharp lefts but Cotto evades. Manny then switches to the defensive then quickly punches Cotto who's beginning to look like he doesn't know what to defend with—body or head?

At the start of the sixth round, Manny is now dictating the show and gives an uppercut to Cotto. Double jabs from Cotto do nothing to Manny. Weaving, Manny evades more punches from Cotto and he retaliates with a right cross to Cotto's face. Right now Cotto is fighting left-handed but poorly executes against Manny's defenses. A one-two-three combination from Manny connects and Cotto's left cheek is bleeding. His right eye is now bleeding as well, courtesy of Manny.

Manny gives Cotto two solid punches but Cotto gets back with a punch of his own that doesn't quite connect. The round ends with Manny smiling to his corner.

The seventh round starts with Manny giving a right to Cotto and then a combination. Seven punches in all and Cotto is on the defensive. The two then exchange blows but things quickly escalate with Manny giving a punch to Cotto's chin. Manny continues the offensive by giving Cotto a flurry of blows. A right cross from Manny penetrates Cotto's defenses. After a while, Cotto gets back with a clean jab to Manny's face.

Manny continues to attack with Cotto just defending. Before the bell, Cotto manages to give Manny a jab.

The eighth round commences with Cotto getting a left jab from Manny. The right part of Cotto's face is now swollen and Manny won't stop with his combinations to Cotto's defenses. Cotto jumps up but backs away after Manny releases another combination. Manny connects but to little effect. Cotto right now is just weaving out of the way and Manny connects once again and makes the Puerto Rican dizzy. Cotto keeps his distance until the end of the round.

Cotto can't get too close to Manny at the start of the ninth round, knowing that Manny can counterpunch quickly and heavily. Cotto risks by advancing and attacking Manny but this has no effect. Manny corners Cotto and gives four punches. Manny continues the offensive but Cotto manages to survive the storm of punches. Cotto gets a hard left from Manny which makes him groggy. Manny surges forward to follow it up but Cotto immediately defends. Cotto gets away from Manny and Manny taunts him to come closer and fight. The round ends with Cotto breathing hard.

The tenth round starts with the bloodied Cotto once again keeping his distance and Manny advancing with jabs. Cotto combines punches which are easily evaded by Manny. The two now go to the center and Manny gets two jabs in the face from Cotto. Right now Cotto is in control but only just, as Manny immediately recovers with jabs to Cotto's face. Cotto answers back with body punches but goes back quickly to defensive mode.

Manny moves forward and gets close to Cotto, giving him a combination of jabs and a one-two-three combination but doesn't connect.

LAST TWO ROUNDS. The eleventh round starts with Cotto attacking Manny with left jabs. After that he retreats, but Manny gives Cotto a right jab. Manny's pumped up and has cornered Cotto with jab-punch combinations to the face and body. Cotto is now bloodied in the left eyelid and Manny continues to jab and jab until Cotto can take no more and retreats.

Cotto keeps moving away from Manny and remains far from him until the end of the round.

The last round starts with a sweaty but not bloodied Manny while the cut-up Cotto raises up a left cross which Manny evades. After that, Manny gives a left and Cotto retreats.

Noticing that Cotto is no longer fighting and simply evading Manny's punches, referee Kenny Bayless puts a stop to the fight and awards the win to Manny Pacquiao!

The Filipino fighter is the new WBO Welterweight champion!

ZETA GORRES NOW STABLE. Meanwhile, bantamweight contender Zeta Celestino Oliveros Gorres, who won a unanimous decision against American Juan Melendez in a 10-round bout at the House of Blues at Mandalay Bay last November 13, collapsed moments after his victory. He was wheeled out and sent to the University Medical Center in Las Vegas to relieve swelling on the left side of his head which was, according to a report from philboxing.com, a subdural hematoma.

The Filipino prospect, whose ring moniker is Z "The Dream" Gorres, is currently stable and conscious as of November 14, 2009. Once recovered, Gorres will have to stay in the United States for about six months for his rehabilitation.