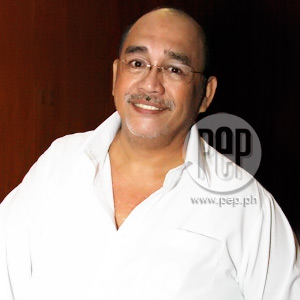 Johnny Delgado was happy when he was interviewed by Startalk last February 2009, because chemotherapy was "melting" the lymphoma cells in his body. "I'm responding well and I'm doing okay," the veteran actor said. But in the end, the cancer cells proved too strong and the actor succumbed.

Veteran actor Johnny Delgado passed away today, November 19, after a long battle with lymphoma, or cancer of the immune system.

According to a Twitter post by director Laurenti Dyogi, actor Ping Medina, and several of his friends in the industry, Delgado breathed his last at 1:20 p.m.

Ping Medina's Twitter post read: "Mr. Johnny Delgado has passed away :( Mabuhay ka sir. Have your rest. Your legacy will live on."

The veteran actor is survived by his wife, filmmaker and actress Laurice Guillen, and their daughters, opera singer and theater actress Ana Feleo and TV and film actress Ina Feleo.

MULTI-AWARDED. Johnny Delgado is a multi-awarded film actor, appearing in more than 50 films starting the late 1960s. He starred in the films of renowned directors Lino Brocka, Mike de Leon, Ishmael Bernal, and others.

Delgado won his first acting award in 1981, when he was given a Gawad Urian for Best Supporting Actor for his performance in Mike de Leon's Kakabakaba ka ba? (1980).

In 2001, Delgado won the FAMAS best actor award for his performance in Star Cinema's Tanging Yaman (2000).

Towards the end of his long career in movies, Delgado acted in several independent films, among them Ang Huling Araw ng Linggo (2006), Kaleldo (2006), Santa Santita (2004), and La Visa Loca.

Delgado's last film project was the short film Labing-Labing (2009), written and directed by his daughter Ina Feleo. The actor teamed up with Laurice, where they also played as a married couple.

His last TV appearance, on the other hand, was on the ABS-CBN primetime series May Bukas Pa.

CLICK HERE to watch music video of "Ikaw at Ako" by Johnny Delgado.