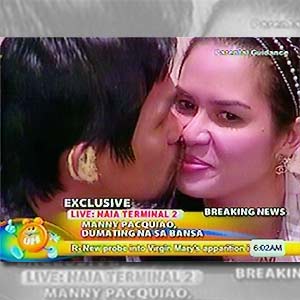 At the presscon after his arrival, reporters teased Manny Pacquiao to kiss his wife Jinkee. He gladly obliged, and Jinkee gamely returned his affection.

To affirm that all's well in his family, world boxing champion Manny Pacquaio hugged and kissed his wife Jinkee in public this morning, November 20, downplaying rumors that he is having an affair with a sexy actress.

Manny arrived in Manila from Los Angeles around 5:30 a.m., accompanied by Jinkee, his parents Dionisia and Rosalio, members of his training team, and Deputy National Security Adviser Chavit Singson.

Krista Ranillo, the rumored girlfriend of the boxing champ, was not on the same flight.

Manny first asked to see his children Princess, Michael, and Jemuel, embracing them tightly, before he answered questions from the press. His fourth child, Queen Elizabeth, was not present.

Because the People's Champ is set to a hectic schedule today, time allotted for questions was greatly limited. Manny immediately thanked his fans when he arrived.

No questions were asked to clarify the Pacman's alleged affair with Krista. The crowd, however, teased Manny to kiss his wife. He gladly obliged, and Jinkee gamely returned the kiss.

Later, in a sit-down interview on GMA-7's morning show Unang Hirit, Manny said there is no problem in his family right now.

Jinkee, on the other hand, explained the reason for her breakdown during a Holy Mass homily abroad. In a video shown on news programs, Jinkee was shown sobbing on a friend's shoulder when the priest was explaining the importance of family. She chose to ignore Manny, who was sitting beside her.

According to Jinkee, she cried for no other reason but that she was just missing her children.

After the parade, Manny will attend a victory show organized by GMA-7 at the SM Mall of Asia Atrium from 2:30 to 4 p.m.

He will then shuttle to the Quirino Grandstand to receive his "Order of Sikatuna" with the Rank of Datu (Katangiang Ginto), for his outstanding achievement.

A dinner with executives of Solar at the Manila Hotel will end the boxing superstar's day.