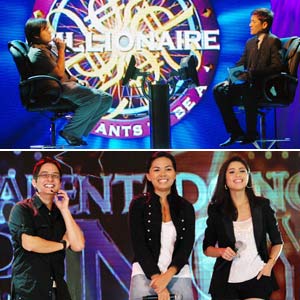 During a speech before the graduating students and administrators of Xavier University-Ateneo de Cagayan in 2007, businessman Manny Pangilinan admonished his audience:

"Exercise your right to dream. I want you to be what John F. Kennedy wanted himself to be—'an idealist without any illusions.' You may or may not get there, but know that you must try. And you hold on and hold out."

Two years after that graduation address, Pangilinan now stands as the new majority owner of the TV5 network. The transition was made possible after longtime CEO Tonyboy Cojuangco sold his remaining shares to Pangilinan's MediaQuest group.

MediaQuest Holdings, Inc. is widely known in the business sector as the media arm of the Philippine Long Distance Telephone Company (PLDT). The firm has been very active in bringing new innovations to the telecommunications industry by merging various traditional media outlets with modern technological platforms such as the Internet.

TO THE BIG SCREEN. Prior to the takeover, TV5 emerged as the able underdog in the so-called network "duopoly." This year alone saw the station's steady climb to the number 3 position due to the impressive showing of some of its programs, particularly those in the weekend bracket.

Pangilinan's latest conquest coincides with the 21st Philippine Ad Congress. This year's annual gathering of minor to major players in advertising, media, and business was held at the Subic Bay Convention in Zambales.

TV5's presentation to the delegates took place at lunch time last Friday, November 20. The network formally introduced its new head and other bigwigs through a VTR.

Ryan Agoncillo of Talentadong Pinoy and Vic Sotto of Who Wants To Be A Millionaire attended the event to give away cash prizes to lucky delegates who participated in the mini-program prepared by the network.

Plans and goals of the new management specifically for next year were enumerated during the presentation. The network will venture into the movies come 2010, a decision that came from the self-confessed movie fan Pangilinan himself who wanted to set a higher goal for the network.

"For many countries, like the Philippines, movies have become part of local culture. We want to do our part in reinvigorating the movie industry. That's why we plan to produce more movies than the combined total of the two leading networks," said Pangilinan in a written statement.

"This is a long term investment for us. One that we know will benefit a lot of people, from those behind the cameras to those in front of them. And ultimately, the Filipino audience, whether they're watching on television, on their computers, on their mobile phones or on any other device. From here in the Philippines or anywhere in the world, we will reach them and they can reach us."