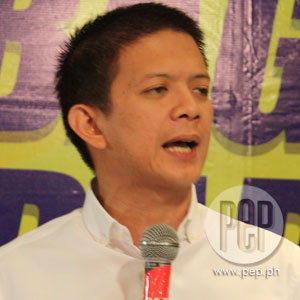 Sen. Chiz Escudero is no longer running for president in the May 2010 elections. At a press conference held in Club Filipino in Greenhills, San Juan this morning, November 24, the 40-year old solon said he has decided to continue his term as a senator and not to seek any position next year.

Escudero said he does not want to be "eaten by the system" if he seeks the highest office of the land.

Escudero also hinted that his decision to halt his candidacy might have something to do with money. Political analysts say that at least two billion pesos is required to be able to launch a successful nationwide campaign that will ensure an easy win.

Earlier, Escudero was reportedly being primed to be the standard bearer of the Nationalist People's Coalition. The Senator, however, quit the political party last month allegedly due to lack of support from party Chairman Emeritus Danding Cojuangco.

SUPPORT FOR NOYNOY? Escudero also admitted that his close friendship with Liberal Party presidential bet Sen. Noynoy Aquino also factored into his current decision. The two reportedly met after Escudero left NPC. Details of the meeting were not made public.

Escudero said he has not yet decided who to endorse.