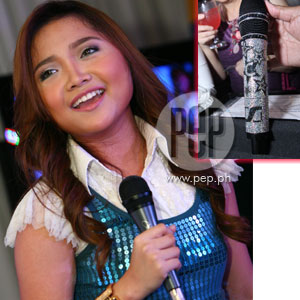 Charice is now the brand ambassador of Sennheiser in the Philippines. Last November 26, the singer launched the limited-edition Sennheiser microphones that bear her signature. Executives of the German company also gave a microphone encrusted with Swarovski crystals (inset) as a gift to Charice.

Charice used a gray microphone to sing the upbeat song "Fingerprint," which she performed for the first time in the Philippines.

After her energetic song-and-dance number, the crowd immediately requested an encore. Before she performed another song, Charice chirped, "Ginaganahan ako kumanta dahil sa mic ko, e." She then performed the songs "Note to God" and Beyonce's "Halo." (CLICK HERE to watch video)

On closer inspection, one can see what makes the microphone special: it bears the signature of the singer and is encrusted with the patented Swarovski crystals. According to Sennheiser executives, only a limited number of these Charice-edition microphones will be available in the Philippines.

How does she feel about being chosen by Sennheiser, a leading German audio electronics brand, to be its ambassador in the Philippines?

"Kinilabutan ako nung sinabi nila na next endorser ako, kahanay nina Beyonce and Celine Dion," revealed Charice, because when she was only seven years old, she distinctly remembers wishing that she could have her own Sennheiser microphone.

According to the website of the German company, customizing a handheld microphone with 2,300 crystals can cost up to $999 (around P47,000). Mommy Raquel told PEP (Philippine Entertainment Portal) how she came up with the design for Charice's personalized microphone.

ON OPRAH'S UPCOMING PLANS. Since Charice considers American talk show host Oprah as one of her consultants, what was her reaction to the news that The Oprah Winfrey Show will stop airing by September 2011?

There have been reports in the U.S. that the "Queen of Daytime Television" is planning to open her own cable network called "OWN," the Oprah Winfrey Network.

ON RHAP SALAZAR'S U.S. TV DEBUT. Last November 17, Rhap Salazar appeared as a guest on The Ellen Degeneres Show, a feat that Charice did on December 19, 2008.

As for her own upcoming projects, Charice revealed that she will be going back to the United States this Monday, November 30, to have a pictorial for her first U.S. studio album. "Lalabas na yung single by January 1 pero yung club version lalabas na by next month," she says. "Hanggang December 12 lang ako doon then wala na 'kong sked."

Her still-untitled album, produced by David Foster, will be released during the first quarter of 2010.