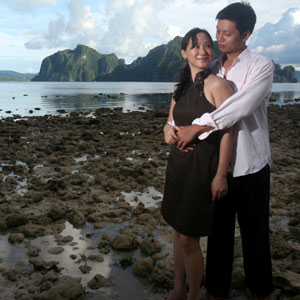 The Tourism Authority of Thailand created the Ultimate Thailand Explorers contest to propagate the country's tourism spots. Among the contestants are husband and wife team Michael Paul and Jennifer Cocuaco (in photo) who, due to constant effort, earned a place in the finals.

Ultimate Thailand Explorers contestants Michael Paul and Jennifer Caspe-Cocuaco recently took in the most online votes to make it in the finals!

Teams of two from all over the world will get to explore the attractions and activities in these tourist spots and inspire others, primarily thru blogging, to visit Thailand's destination spots.

A total of 192 teams joined and Michael and Jennifer were the only contestants from the Philippines who made it to the semifinals. (CLICK HERE to know more) In the following weeks, teams were eliminated and all that remained were five teams to represent the five tourist destinations—with Michael and Jennifer being the official finalist for Koh Samui.

The husband and wife team earned 4,821 votes, sealing their names in the finals. The eliminated teams from Singapore and the United Kingdom trailed behind with 3,594 and 3,054 votes respectively.

Koh Samui is an island of Surat Thani Province located off the east coast of Thailand. It is also the country's third largest island filled with white sand beaches, coral reefs, and attractive waterfalls, making it the second most popular island destination of the country after Phuket. (Wikipedia.org)

Michael and Jennifer will explore the beauty of Koh Samui from December 7 to 18 to experience more thrills and adventures, and entice the rest of the world to experience it all by publishing articles, photos, and videos on the Internet.

ULTIMATE GOAL. In an email interview with PEP (Philippine Entertainment Portal), Jennifer tells of the goals she and husband Michael plan to do to win the contest. She also reveals some plans after the contest, like hosting their own travel show. Their ultimate goal, aside from winning the competition, is to be ambassadors of the Philippines and to meet with the King of Thailand.

Meeting the King of Thailand would be more than just an exciting experience, it's something personal. As Jennifer told PEP, "We want to thank the King for helping us during the recent calamities that struck the country. Thailand was the first to send in relief goods for our kababayans. We want to tell him how we admire him for being able to command such love and respect from his people... More than that, we want to get a chance to pray for his health."

GENERAL STRATEGY. Since they've already done quite a lot to win the semifinals, what is their team's strategy now?

"You know, more than having elaborate strategies, we're really thinking on the Pinoys' connectedness," explained Jennifer. "We believe in the Filipino's willingness to help and support a kababayan in need. We're not afraid of the U.S. or France [their challengers]. They may have more people using the 'Net and have the technological advantage, but we know they can't topple our Bayanihan spirit."

For the finals, the Cuacos have printed flyers to distribute. Aside from that, they are constantly blogging every day, thinking of new videos to shoot and fresh material to write (CLICK HERE to view their blog).

PROMOTING THE PHILIPPINES. Even though they've traveled abroad to experience different sites and activities, Jennifer said that she always talks about the Philippines and its beautiful tourist spots to foreign friends every chance she gets.

"When I get the chance to travel, I do brag to foreigners how nice our beaches are," said Jennifer. "I really believe we have a beautiful country!

"Long before this competition," Jennifer added, "Michael has come up with a blog to promote Zamboanga's local tourism. Mahirap lang nga kasi, na ang peace and order situation ang problema. His friend kidded that it seemed like Mike was the only person in Zamboanga who was so proud of touring visitors there."

If given the chance to promote tourist spots in the Philippines via a television show, would they grab it?

Jennifer perked up and exclaimed, "It's my dream. How I wish!"

Michael enthusiastically answered, "Definitely! I think what we could really present is the common scenario of the common Filipino having a vacation and the situations that may arise on such trips. Something that is real, which Filipinos could connect with."