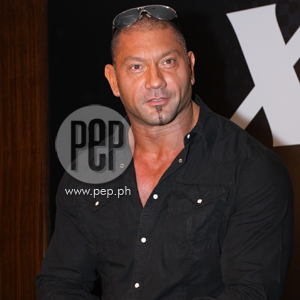 World Wrestling Entertainment (WWE) superstar Dave "The Animal" Batista admitted he gets into arguments with fellow wrestlers Rey Mysterio Jr. and Triple H because of their boxing favorites. Being Mexican, Rey always roots for the Mexican boxers, while Triple H is a close friend of Pretty Boy Floyd. "Oh, we argue all the time," Batista said while laughing about his arguments with Rey and Triple H. "He [Triple H] is kinda tight with F

PEP (Philippine Entertainment Portal) was among the press invited to a press conference held for the 6-foot-6-inches tall, 290-pound pro-wrestler and the latest energy drink to hit the market. The imposing Batista warmly greeted everyone and gamely answered the questions thrown at him by the press with Showbiz Central host Mo Twister hosting.

Among the questions answered by the five-time pro-wrestling heavyweight champion was about the movie he's supposed to do with current World Boxing Organization (WBO) welterweight champ Manny Pacquiao.

"There were talks about it," he said. "I would love to. I'm a big fan of Manny. I really consider him as a friend. Although I have not spent a whole lot of time with him, but I was fortunate enough to walk him to the ring and sit with him a little bit and talk to him. He's a great guy, and I would love to do a movie with him."

Batista said his hectic WWE schedule, however, is among the things keeping him from doing a movie with the Filipino boxing champ. Batista was part of Manny's ring entourage during the latter's title fight with Brit boxer Ricky Hatton last May 2009 at the MGM Grand Las Vegas.

Batista (David Michael Bautista Jr. in real life) also told the press of what he thinks Manny would do to Floyd Mayweather Jr., the former Pound-for-Pound King and latest challenge for the Pacman. Talks have been going on between the two boxer's camps for either a March or September 2010 match.

"I think Manny's gonna kill him!" the sports-entertainment star said. "And I believe that. And even if I wasn't a fan, just watching him [Manny] in the ring is just so impressive. He's in a different league."

Batista also admitted he gets into arguments with fellow wrestlers Rey Mysterio Jr. and Triple H because of their boxing favorites. Being Mexican, Rey always roots for the Mexican boxers, while Triple H is a close friend of Pretty Boy Floyd.

"Oh, we argue all the time!" Batista said while laughing about his arguments with Rey and Triple H. "He [Triple H] is kinda tight with Floyd Mayweather, so there's a constant argument with us. But at the end of the day, he knows that I'm right."

PROUD TO BE PINOY. Edwin Tutanes, general manager of URC Beverage II Division, said Batista epitomizes the image Xplode wants to project. "And as we all know, Dave has Filipino roots, and Xplode is a Filipino product. And we saw the match and we felt that it could be a good match to have Xplode and Dave Batista as our endorser."

Aside from his being half-Pinoy and now, his endorsement of a Filipino product, the part-Greek, part-Filipino wrestling superstar have also been practicing the Filipino martial art kali.

"I do a style developed by Ray Dionaldo, it's Filipino Combat Systems. It's really a knife and empty hands system, kali. They don't do escrima or arnis. I've been doing it for almost four years. I trained under a guro [instructor] named Moreese Crump. A guro under Ray Dionaldo."

Dave is also proud of the work ethic he inherited from his grandfather Alfonso Bautista. He wasn't really sure where Grandpa Alfonso really hailed from. All he knows about his grandfather is that he came somewhere from the south of the Philippines and went to the States with practically nothing.

"So he had to work really hard to earn a living. He always had like three or four jobs. He was the hardest working person I knew. And when he passed away, a lot of people came to his funeral and talked to me about him. And they said, I knew your grandfather 'cause he was my barber, or he was my taxi driver. He always had these odd jobs, three or four jobs, 'cause he was such a hardworker," Batista proudly said about his grandfather.

And despite his big size, display of great strength and ferocity in the wrestling ring, Big Dave admitted he is only scared of one person—his mother, Donna Ray Bautista.

"She can talk harshly to me, you know... Well, it's probably, more of respect rather than fear. You know, it's one of those things that no matter how old you get, if you still love and respect your mom, you always kinda back down from your mom," Dave laughingly said about another of his Pinoy traits.

Also big on Batista is respect for women, another Filipino trait he is also proud of. When asked if he has met someone here whom he finds attractive, the wrestling superstar mentioned a meeting he had with a really beautiful woman who turned out to be a famous actress during his last visit in the Philippines. Asked for the name of the actress, Dave said he'd rather not mention her name.

"I had no idea she was an actress. The first time I saw her, I was like, 'God, she's so beautiful!' And we had this conversation, it was in a nightclub I went to, and she was just awesome. It was only through one of my bodyguards, Lorenzo, that I learned that she's a popular actress here. I really had no idea," the popular WWE wrestler said.