Jinkee Pacquiao breaks her silence in exclusive tell-all with YES! 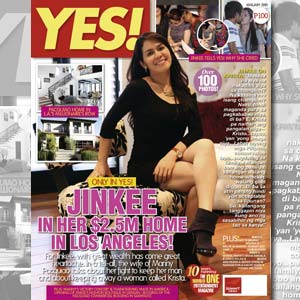 Jinkee Pacquiao on the cover of the January 2010 issue of YES! Readers will get to see more than 200 photos of the Pacquiaos' $2.5M home in Los Angeles' Millionaire's Row.

Manny Pacquiao made history as the only boxer to win in seven different weight divisions. But he figured in other headlines for an entirely different reason late last month. Newspapers and talk shows were abuzz with his alleged secret affair with actress Krista Ranillo while his wife Jinkee chose to spare only a few words about the issue.

Jinkee finally broke her silence in an exclusive interview with YES! magazine for its January 2010 issue.

Instead of confronting her husband immediately about the rumors, Jinkee decided to hold off any talk about their marital problems since Manny was preparing for a big fight, and the nation's pride was at stake.

Jinkee continues to fight for her love and her marriage, airing her pent-up emotions and setting the record straight only in YES! this January 2010.

Aside from featuring the Pacquiaos' $2.5M home in Los Angeles' Millionaire's Row, YES! also paints the big picture of the Jinkee-Manny-Krista controversy.

Krista was not ready to air her side of the issue, but her friend Dennis Evangelista talked to YES! in Krista's defense. "Tinext ko siya, sabi ko, 'Whatever it is, kailangan i-defend mo ang sarili mo,'" he tells YES! Out of everything that he and Krista had talked about, one thing is clear: "She's denying it," Dennis says, "Hindi daw totoo."

Find out more about what Jinkee and Krista each have to say in the January issue of YES! magazine, available in newsstands, bookstores, and supermarkets nationwide. A digital edition of YES! will be available on January 2010 for international subscribers. Log on to www.PEP.ph for more details.