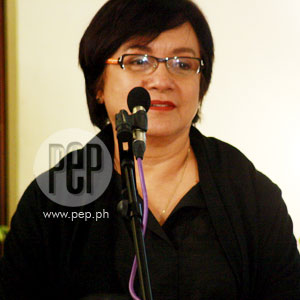 Laurice Guillen says that her husband Johnny Delgado avoided saying the word "goodbye" even when he was on his deathbed.

Exactly a month after her husband's demise, director Laurice Guillen talked about her fondest memories of actor Johnny Delgado during her solo press conference for I Love You, Goodbye, held last December 19 at the ABS-CBN compound. The "love drama" is Star Cinema's official entry to the 2009 Metro Manila Film Festival, and it marks Direk Laurice's big-screen comeback after a five-year absence from the directorial seat.

"Walang ligaw-ligaw yun!" Guillen laughed as she remembered how Johnny made his first romantic advances. "We were doing a movie together, yung Init [1979] by Lino Brocka. Maghapon kaming walang shooting. That was the first time I met him. Maghapon kami sa beach, kuwentu-kuwentuhan lang hanggang mag-sunset.

"When we started talking, I did not think that it would lead to us having a relationship, becoming lovers, and eventually him being the father of my children," she reminisced during an interview with PEP (Philippine Entertainment Portal) and some members of the entertainment press.

Laurice then demonstrated by mouthing the words: "I Love You." According to her, she will forever replay that single memory in her mind.

I LOVE YOU, GOODBYE. While Direk Laurice admitted that she was used to uttering "I love you" to Johnny, on his last moments she wasn't able to bid him "Goodbye."

She then shared an anecdote describing how Johnny avoided saying the word goodbye.

"He turned his head away, so I stopped. Ayaw niya mag-goodbye. I mean, basta let it happen na lang. Hindi niya kaya mag-goodbye. For that matter, ako rin siguro. If it were up to me, I would not say goodbye."

She later summed it all up by saying that Johnny "was prepared to die, but he wasn't prepared to say goodbye."

WIFE, DIRECTOR. Despite the passing away of her husband, Direk Laurice wowed the whole production crew when she resumed filming for I Love You, Goodbye a day after Johnny's funeral. Despite her period of mourning, she knew that her husband would have wanted her to work right away.

After all, she revealed that Johnny was her worst critic.

But despite the often brutal critique, she added that Johnny always supported her films.

REMEMBERING JOHNNY. During the presscon, the director said that she always admired her husband's overflowing passion.

This year's Christmas will be the family's first holiday celebration without the man of the house. Direk Laurice narrated that they had always celebrated Christmas solemnly with mass and prayer, a hearty dinner, happy chatter, an exchange of gifts and lastly, swapping of huge Christmas cards.

"Kaya malalaki ang Christmas cards namin dahil may sulat. So that's been our ritual. Gusto ko sana ganoon rin ang Christmas namin ngayon," she said. "Just the three of us [she and her two daughters Ana and Ina], but I'll probably set the table for four," she said happily.