PEP YEAR-END REPORT (Part 1) Remembering the most scandalous of all the scandals, the fiercest of word wars and the hottest issues of 2009 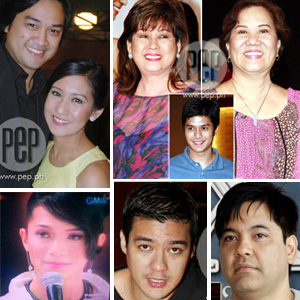 These are some of the personalities that warmed up the PEPsters last year for a hot and issue-filled 2009. (Clockwise from left) Jolina Magdangal and Bebong Muñoz; Annabelle Rama, Wilma Galvante, and JC de Vera; Martin Nievera, Jomari Yllana, Bebe Gandanghari.

The year gave Filipinos the most scandalous of all the scandals, the fiercest word wars, and the most number of hot issues and bad news. But despite all of these, 2009 is also the year the words "resilience," "courage," "unity," "love" and "charity" were highlighted, as Pinoys rose to the challenges brought by adversities both man-made and natural.

PEP (Philippine Entertainment Portal) looks back at the hot news and issues in this Year-End Report.

JANUARY: OF BREAKUPS AND PROUD ANNOUNCEMENTS. The year started with news of a breakup. Jolina Magdangal and Bebong Muñoz, a couple for six years, quietly called it quits. If not for Daddy Jun Magdangal's confirmation on January 3 through PEP contributor Nora Calderon (CLICK HERE to read story), the public would not have known about the breakup. Jolens and Bebong were expected to be the next couple to announce their engagement, following their friends Judy Ann Santos and Ryan Agoncillo's engagement last year. Like everyone else, Daddy Jun was surprised when Jolina admitted the breakup before Christmas 2008.

Still on another breakup, Hayden Kho admitted that he cheated on his much older girlfriend Dr. Vicki Belo (CLICK HERE to read story). He also admitted that he had a short "for fun only" relationship with Belo endorser Katrina Halili. The actress, on the other hand, was offended by Hayden's attitude about their past relationship, and said she never enters a relationship "for fun only." Both Hayden and Katrina, however, denied that they had a sex video. A fourth party by the name of Princess Velasco, was also named as one of the reasons behind the Hayden-Vicki breakup.

Marian Rivera and Dingdong Dantes, meanwhile, continued their "neither confirm nor deny" stance on their real status. Dingdong had just gotten out of a long-term relationship with Karylle before Christmas, and the pretty Caviteña was being pointed to as the reason for the breakup. Both Dingdong (CLICK HERE to read story) and Marian (CLICK HERE) started giving hints that their relationship was more than professional, that they were special to each other.

No more hints, however, on what Rustom Padilla really wanted to be when he came back to the Philippines after his three-month stay in the U.S. Shortly after his arrival he announced on Startalk that Rustom Padilla was no more and that Bebe (pronounced "bibi") Gandanghari was here to stay (CLICK HERE to read article).

Another proud announcement was that of YES! setting a record in Philippine publishing. The magazine's "Wowowillie" issue broke records when its circulation reached 200,000 copies (CLICK HERE to read story). Not only was this a first in the leading Philippine entertainment magazine's eight-year run, but also in the country's magazine publishing business.

FEBRUARY: DISCORD DURING THE MONTH OF LOVE. GMA-7 announced newcomer Carla Abellana as its new talent and the star of the Pinoy version of the Mexican telenovela Rosalinda (CLICK HERE to read story).

Meanwhile, trouble was brewing in the Kapuso Network. Dennis Trillo expressed his disappointment when he learned that Heart Evangelista had backed out of their upcoming teamup, the Sine Nobela Muling Buksan ang Puso (CLICK HERE to read story). When asked about the reason behind the shelved project, Heart said in an interview that there were things in the story that she thought might conflict with an existing contract she has with an endorsement (CLICK HERE to read story). Plus her manager, Annabelle Rama, wanted her to star in a primetime soap, not in an afternoon-slot drama.

Because of Heart's camp's refusal to accept the show, GMA Network, through its VP for Legal Affairs Atty. Dick Perez, issued a letter to Heart, to remind her of her obligation to GMA-7, and that the Kapuso Network will take legal remedies to protect its interests because of Heart's refusal to accept the show assigned to her (CLICK HERE to read story).

The issue was eventually settled when Heart's parents (who also stood as her primary managers) met with GMA-7 President, Chairman and CEO Atty. Felipe Gozon in a closed door meeting, without Heart's co-manager Annabelle Rama.

Annabelle Rama's rift with GMA Network's SVP for Entertainment TV Wilma Galvante was renewed, with a claim by the feisty talent manager that her ward JC de Vera was harassed by the GMA executive during a story conference for a proposed project for the actor. Ms. Galvante countered Annabelle's accusations (CLICK HERE to read story).

Boy Abunda was also one of the most read celebrities this month. Aside from his rift with Showbiz Central host John "Sweet" Lapus, which stemmed from John's exclusion in a Calayan Surgicenter billboard, Boy also had a bone to pick with Vicki Belo.

He took offense when the beauty surgeon stated, "If you want to look like Boy Abunda, then go to Calayan. If you want to look like Dingdong Dantes and Piolo Pascual, come to Belo" (CLICK HERE to read story). The doctor apologized through a text message. Boy felt Dra. Vicki could have done better, but accepted her apology to let the issue die.

Right after the successful concert of Martin and Pops came a shocking breakup announcement.

Jomari Yllana confirmed that he had called it quits with Pops, his girlfriend of four years (CLICK HERE to read story). Although no specific reason was given for the breakup, rumors pointed to their busy schedules and a "third party." Both Pops and Jomari denied the rumors. Pops said she never saw the breakup coming.

The two chose to keep mum, but Pops's ex-husband Martin granted an interview and said he could no longer work with Jomari. "He [Jomari] is not okay with me now for hurting Pops and being so mysterious," Martin said of Jomari (CLICK HERE to read story).

Jomari took umbrage with that remark. As guest on Anjo Yllana and Eugene Domingo's Cool Center, he addressed the Concert King as "Mr. Nievera," expressing annoyance over Martin's unsolicited opinion.

"Mr. Nievera, I find it strange and hypocritical na of all people, ikaw pa ang nagsasalita about Pops getting hurt. I may be wrong but if you have some unresolved guilt within you, please refrain from using my situation with Pops para lang magmukha kang malinis na tao... Mr. Nievera, not at my expense," was Jomari's open message to Martin. (CLICK HERE to read story).

Martin, in his message to The Buzz, said he would not react to Jomari's statements in Cool Center but told the actor-producer to tell the people what they want to know and to defend Pops against false accusations about the breakup (CLICK HERE to read story).

When finally cornered by the showbiz press, Pops confirmed that she and Jomari had already talked and reached closure. As to why they broke up, the singer said everything was still unclear to her but she just wanted to move on, like Jom himself. (CLICK HERE to read story)

Meanwhile, the Annabelle-Wilma feud continued, as both presented their own versions, in separate press conferences, of what happened during the storycon where JC de Vera cried. Both women also talked to the press about the fate of JC after his crying incident at the GMA office.

The fate of JC's career with GMA-7 was resolved a couple of days after the press conferences of both Annabelle and Galvante, when the Kapuso Network released its official statement declaring that JC will remain a GMA Network contract artist (CLICK HERE to read story).

It was a sad day on March 6 not only in showbiz but all over the country, when Vic Sotto announced on Eat Bulaga! the passing of the Philippine King of Rap Francis Magalona. The actor-musician-TV host was one of the hosts of the GMA-7 noontime show and had been battling leukemia since being diagnosed last year. He succumbed after months of confinement at Medical City in Pasig. His friends, co-workers and fans not only in the Philippines but around the world, grieved for his death. He was given the posthumous Presidential Medal of Merit for his valuable contributions to the country through his music.

For its part, the legendary Pinoy Rock band Eraserheads paid tribute to Francis during their The Final Set reunion concert (CLICK HERE to read story). The concert was the Eheads' continuation of their August 2008 concert which was abruptly stopped when lead singer Ely Buendia was rushed to a hospital after collapsing backstage from chest pains.

Days after the Master Rapper's death and burial, PEP and Pia Arroyo-Magalona, Francis's widow, discovered two groups using his name for "benefit" concerts (CLICK HERE to read story) without her permission. While the Dubai group made efforts to contact and apologize to Pia, the Canada group did not reach Pia for permission or even issue a statement.

Manny "Pacman" Pacquiao made a surprise decision to give ABS-CBN exclusive broadcasting rights to his fight with British boxing champ Ricky Hatton and to his future fights (CLICK HERE to read story).

Solar Entertainment Corporation, the company where Pacman is currently signed with for the exclusive broadcast rights of his fights, was obviously disappointed with Manny and threatened to sue the boxer and ABS-CBN.

GMA-7 was likewise disappointed because aside from being partners with Solar Sports, Manny's decision would violate a provision in his contract, which prohibited him from appearing in any media company without the Kapuso Network's permission.

The Kapamilya Network, on the other hand, said they violated no contract and that they were just welcoming Manny back when the boxer approached them for the media coverage of his upcoming fight.

On March 21, the "confusion" was settled when Manny retracted his decision and apologized for causing public confusion. He said he would honor his contract with Solar and GMA-7 (CLICK HERE to read story).

Two controversial videos surfaced during this month. The first was that of RTW designer Boyet Fajardo harassing a duty-free employee, and the second that of comedian Bayani Agbayani challenging another man to a fistfight (CLICK HERE to read story).

Both Boyet and Bayani apologized for their behavior in the videos. Boyet reasoned out that he was tired, sick and had not yet eaten during his flare-up, while Bayani said he was provoked and was intoxicated during his incident at the parking lot of a club.

Near the end of the month, PEP inadvertently uploaded a story, to which Richard Gutierrez reacted by suing the website with a P25M libel suit, in spite of an apology letter and a press conference.