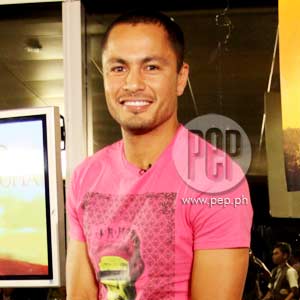 Derek Ramsay was confident when he said that his girlfriend Angelica Panganiban does not get jealous about rumors that he's been spotted with other women.

"Noon, sobra [selosa siya]. Na-realize niya siguro na she has nothing to be jealous about. I'm very open with my female friends. I have three sisters, I grew up more with women than with men. That's how I am, e," said Derek in an interview last Monday, January 18, after the media junket prepared for him as one of the main stars of the Nurserye Habang May Buhay.

Derek openly talked about the rumored sightings that involved him and other women, including Manny Pacquiao's wife, Jinkee.

First, he cleared the name of his radio jock friend.

"Gusto ninyo i-name ko pa, si Mia Bayuga [of Magic 89.9.]," Derek said. "She's a friend of mine na offered me tickets to the Ateneo-UE game. And being a big fan of football, I said, 'Yeah, sure, tara.' Ang daming camera doon, I went there. Nakita ko pa nga sila Tita Cory [Vidanes, ABS-CBN TV Head]. I didn't think anything of it because we're just watching a game."

The hunky actor-model also said that his only visit to the radio station where the lady radio jock is working should not be given another meaning.

"That was the same time. I picked her up sa station and there was a basketball game, nanood kami," he related. "I watched a basketball game na with her in front of thousands of people. I'd be crazy to do something like that. Angel was there also. Actually, that's the only time I hang out with Mia and they say that I'm with her."

"No, we're not texting each other constantly. But yeah, I text her," Derek admitted.

Derek said that this started after his recent visit to General Santos City, where Jinkee became their host.

Derek also disproved rumors that he and Jinkee are sweet to each other.

"That's a lie. I can swear to you right now that it's a lie!" he exclaimed.

He said this is impossible since he is a fan of Manny and he had worked with him in a beer advertisement.

Derek also pointed out, "When we saw each other, there was about 20 people, ang dami namin. You guys know her. She's so devoted to her family, she's that kind of woman. She will do anything for her family. And I'm just being nice. I was taught to respect women and here I am, getting burned for respecting women."

Without further explanation, Derek assured the press, "There's no issue between me and Jinkee."