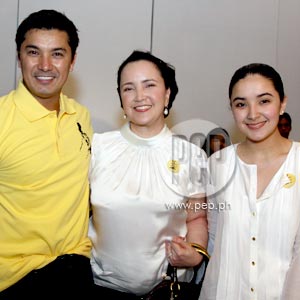 (From left) Albert Martinez, his wife Liezl and their daughter Alyssa were present during the January 24 launch of the Cory Aquino commemorative watch by Swatch.

A corner of Makati City became yellow country once again last Sunday, January 24. The Ayala Museum was decorated with yellow banners and most of the guests were dressed in bright shades of yellow. All these preparations were for the grand launch of the Cory commemorative watch by Swatch.

Among the guests that day were Albert Martinez, his wife Liezl, and their daughter Alyssa Martinez. PEP (Philippine Entertainment Portal) chatted briefly with Liezl and Albert before the program started that afternoon.

Liezl was cast as Ballsy Aquino-Cruz in the two-part episode of Maalaala Mo Kaya, which started airing last January 23. She has not appeared in television for some time after being diagnosed with breast cancer Stage 3 in 2008. How does she feel to be acting in front of the camera once again?

Is she ready to accept more acting projects in the future?

"There are offers, but siyempre I am limited din to what can I do, like in terms of puyatan, kasi I'm just recovering now. Kumbaga, hindi rin ako puwedeng masyadong mapagod. I'm just taking it one day at a time."

Did she set a time limit when it comes to work hours?

PEP also asked Albert how he feels now that Liezl is back in the limelight.

"I really wanted her back for one reason—when you're an actor, you will always be an actor. It's just there. Kaya nga parang feeling ko, she will never be complete if hindi siya lumabas. Like me, my idea of being complete is acting. Ang family niya [Liezl], passion nila, acting. To make her whole, talagang she needs to be part of the system. I trust and I believe she can deliver naman the requirements needed."

He added: "The reason she stopped being part of the industry was because of the kids. Growing-up years na nung mga bata and she told me that she wants to be a mother and take care of the kids and make sure everything's okay. Now, the kids are all big. My youngest [Alyssa] is 17 years old, so kumbaga, she's done a great job with the family. So its about time to do something for herself, which is to go back to acting and being part of show business."

Have they talked about her future projects?

"Actually, there was an offer for her to host a TV show but we will see," Albert said.

Does Liezl still need to undergo medical procedures in the future?

"Wala na, tapos na, we have finished all the procedures, so we are here and enjoy life," he said with a smile before ending the interview.