Will Devaughn on Cebu Dancing Inmates: "They are now a part of history." 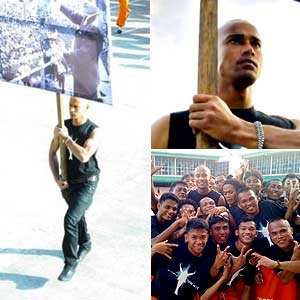 Dance like no prison guard is watching. The Cebu Dancing Inmates once again succeeded in delivering spectacular performances right in the compound of the Cebu Provincial Detention and Rehabilitation Center (CPDRC). Local and international viewers alike have grown in numbers and the latest Michael Jackson tribute by the inmates has been choreographed and performed with by none other than MJ's longtime friend and choreographer Travis Payne. .

The inmates of the Cebu Provincial Detention and Rehabilitation Center (CPDRC) may be behind a high-wall compound surrounded by armed guards, barbed-wire fences and thick iron gates, but they are currently on the wanted list of millions of people online.

Instead of crime, these inmates are wanted for their attention-grabbing dance presentations made popular thru the Internet video site YouTube.com by security consultant Byron Garcia.

International exposure has broadened for the Cebu inmates who earned recognition on the cable news channel CNN. The TV news giant earlier covered the inmates' newest tribute to the late Michael Jackson (August 29, 1958 - June 25, 2009) with MJ's single "They Don't Care About Us," directed by Filipino director A.F. Beneza.

This latest tribute, together with the inmates' "Thriller" cover, was added as special video features in the This Is It DVD and Blu-Ray disc. This Is It is a documentary featuring the rehearsals for what could have been his final concert in London. With his untimely demise the concert did not push through.

WILL DEVAUGHN IN THE LIMELIGHT. Actor and model Will Devaughn also had a part in the dance number when he entered the middle of the performance carrying a poster of African-American civil-rights activist Martin Luther King Jr.

In a phone interview with PEP managing editor Karen Pagsolingan yesterday, January 28, Will talked about his part in the performance.

"Grounded" was how Will described Michael Jackson's choreographer Travis Payne. "I was really surprised how humble he is," he said. "I also met the two other guys [principal dancers Dreis Reed and Daniel Celebre] and they were so humble and grounded and easy to talk to and get along with. They're also spiritual as well. I mean, they have this aura that exudes out of them and envelops them. It was really great working with them."

The inmates, on the other hand, had a different effect on the actor-model.

"Nagulat ako when I met them!" he exclaimed. "They were not like inmates! They were just people who were definitely enjoying the moment that they were given.... They were just loving every moment that they had visitors and, of course, the Michael Jackson on DVD. A part will be filmed with them in it and they are now part of history. It was a very beautiful thing that is why everyone was happy and had so much energy and love for each other."

Will revealed that he was big fan of Michael Jackson, even learning how to do the moonwalk!

When asked why he was carrying the image of Martin Luther King Jr. during the performance, he turned serious and explained, "The thing is, Martin was all about unity and freedom. That [the song] was what Michael Jackson was referring to—love, freedom, and unity."

BEING PART OF HISTORY. Will had no idea that he was about to become part of pop history. During the Sinulog Festival, he was contacted by his manager Dondon Monteverde who asked him if he wanted to be a part of an international project.

"It was a secret and I did not even know what I was getting myself into!" laughed Will. On learning that he would be part of the dancing inmates' number together with Travis Payne, he was elated.

"We all bonded," added Will. "And at the first night, Payne actually told me that I would be good for the flag-bearer part. I was like, 'Are you serious?' I was in awe!"

The next day, Will practised and eventually became one of the people who gave tribute to the great Michael Jackson yet again.

With the production over, does Will have any plans of becoming a dancer as well?

"I like dancing freely and I like to do what my body likes," he said. "Well, I guess we'll see and hopefully be given the chance."

Will stars with Judy Ann Santos in the ABS-CBN medical drama Habang May Buhay which will air starting February 1. He has also started taping the episode "Gimik" for Your Song.

BACKGROUND ON THE CEBU DANCING INMATES. According to www.byrongarcia.com, Byron Garcia is the son of former Cebu Governor Pablo Garcia and the brother of present Cebu Governor Gwendolyn Garcia. The management graduate had "every opportunity to pursue a comfortable corporate career, but he instead chose to help rehabilitate the inmates of the CPDRC" when he was assigned as Capitol Security Consultant. His sister Gwen held the office in 2004.

Dancing as a form of penal discipline has done more than just rehabilitate the inmates—it turned them into international stars.

The first dance video of the inmates was on July 17, 2007 when Byron uploaded an amateur video on YouTube of 1,500 inmates dancing to the tune of "Thriller." Even if it was just a rehearsal and taken from a single video camera, the video got multi-hits from the video website and became the fuse to eventual international recognition.

At press time, that video has over 37 million page views since its upload date and still continues to rise.

After their "Thriller" dance success, the inmates ventured to dance other songs, including "Macarena," "Do The Hustle," "Jai Ho," and even "Nobody." Local music has also been used, like "Jumbo Hotdog" and "May Bilog" with the Sex Bomb Dancers.

But their niche lies in Michael Jackson music, and their new video tribute to the late singer, "They Don't Care About Us," raised the performance a notch higher with different camera angles, stronger production value and a professional touch from a person close to the King of Pop.

Jackson's long time choreographer Travis Payne, together with two of his principal dancers (Dreis Reed and Daniel Celebre) performed the number with the inmates and the result was clearly nothing short of fantastic and emotionally moving at the same time.

The dancing inmates, with their talent and showmanship, may be on the road to international dancing success. But for most of them, the temporary break from prison life, with the opportunity to do something worthwhile and be admired for it, is already a taste of freedom.